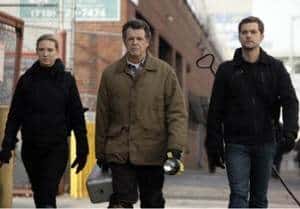 Fringe returns on April 1st with the highly anticipated flashback episode “Peter.” Who, or what, is Peter? Kidnap victim from another dimensions? That would seem to be the obvious answer, but the truth is we do not know – but we soon will. “Peter” goes back and tells us the full back-story behind why Peter shimmers when Olivia looks at him – no, its not because he is Twilight vampire, it’s because he is from ‘Over There’, and now you will see just what Walter did. Keep in mind, Walter’s actions may have been viewed as an interdimensional incident that set off all of this nastiness between us and them, or maybe something else.

The really good news for Fringe fans is that we have gotten our hands on a preview clip for Fringe “Peter”, and we’re going to let you watch it. Right now. Obviously, the clip is very spoilerish. It depicts a critical moment in this very plot – Walter’s passing over to the other dimension. Stay tuned for more details.

FOX has renewed FRINGE, the critically acclaimed thrilling drama, for a third season, it was announced today by Kevin Reilly, President, Entertainment for Fox Broadcasting Company.

‘FRINGE tapped into a deep creative mine this year that built momentum throughout the season and helped give us our first real foothold on TV’s most competitive night,’said Reilly. ‘The entire FRINGE team — from the producers and writers to the cast and crew — has taken smart storytelling and top production quality to a whole new level. The rest of this season is mind-blowing, and we can’t wait to get started on the third installment of this amazing journey.’

‘We could not be more excited to continue the wild ride of FRINGE. We are grateful to FOX, and our viewers, for allowing this fun, mind-bending adventure to go on,’said FRINGE co-creator and executive producer J.J. Abrams.

Series showrunners and executive producers Jeff Pinkner and J.H. Wyman added, ‘This early renewal comes at a great time and adds to the cast and crew’s energy and excitement as we head into production on this season’s revealing final two episodes. We have so many stories to tell, so this is awesome that we have another season to explore the worlds of FRINGE.’