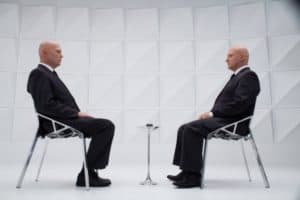 Yesterday FOX released this brilliant trailerÂ for Friday’s two-hourÂ FringeÂ season finale, which they then followed up with the sneak peeks you can see below. Both clips are from “Liberty”, the first episode that will air at 8/7c, and seemingly pick up right where “The Boy Must Live” left off. The team cannot conceive of a way to retrieve Michael from Windmark’s clutches: they are helpless to do anything but wait for Donald/September to return and hope he has a way to track his own son. I’m still at a loss as to why Michael would make the decision to turn himself over in the first place, and I’m hoping we get an answer in the finale.

This second clip is much longer, and depicts Windmark’s interrogation of Michael. We know that some people have a natural – or fostered – resistance to being Read by the Observers, but the child Observer apparentlyÂ possessesÂ something quite different. Not only does he seem to have a resistance to Windmark, but it looks as though he can turn the mental invasion back onto the Captain. Michael is left unaffected, but Windmark himself suffers effects from the exertion in a scene reminiscent of Walter’s interrogation at the same Observer’s hand in “Transilience Thought Unifier Model-11.”