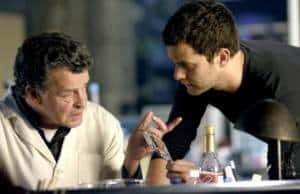 If you watched the Fringe season two finale — and I hope you did — you know that our characters were left between a rock and a hard place. On one hand, a slightly estranged Peter and Walter returned home to this universe, unwittingly leaving Olivia trapped in the alternate universe while the alternate version of Olivia returned with them, infiltrating their side. It’s a cliffhanger, for sure, but it’s not one that necessarily frustrates me. Instead, it actually makes me really excited for the direction that the next season will take. And do you know who else is excited? John Noble and Joshua Jackson.

The duo, who on-screen play father and son, told MTV News that they were looking forward to the battle lines of the two universes being blurred.

“The other thing about ‘Fringe,’ and we hope this will happen, is that while it’s very clear-cut now – everyone’s sort of rooting for the old team – I’m hoping that it won’t [remain] so clear-cut,” Noble shared. “The people on the other side have a very good case to make here. And then you say, ‘Who do [we go for]?’ If we can do that, we’ve created a great drama.”

“If we do it well, you’ll get to know those alternates better,” Jackson agreed, “and you’ll see that they are fully fleshed-out characters as well.”

But what about Peter? He has no alternate, and though he has returned to this universe, he still has no real home. “I can’t imagine a thing that would draw him more strongly back into the other universe: Here he is confronted with his mother … and then at the same time he has this – if not blood connection, but familial connection,” Jackson said. “He was raised and has lived and become connected to our Walter, so he really is dynamically torn. There are reasons for him to choose both.” Not to mention the fact that Olivia, with whom he was just developing a relationship, is trapped in the alternate universe. But could there develop a love triangle between Peter and the two Olivias? There seemed to be a bit of chemistry between Peter and Altlivia in the finale.

However it plays out, I have confidence that Fringe will once again prove to be one of the most engrossing shows on television. Season three is slated to premiere at an undetermined date next September.