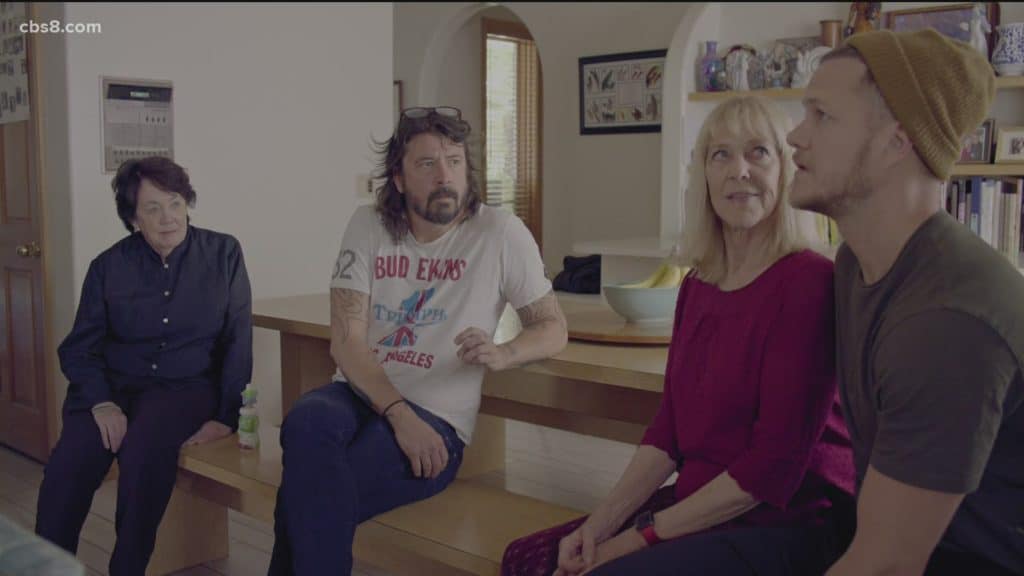 Parents, mothers in this instance, will usually have a tendency to protect their children from what they perceive as a bad decision and will endeavor to teach their kids to follow the type of path that will lead them to success and to a happy, fulfilling life, but there are times when it can’t be helped when a parent has to simply support even if they worry about their child. When it comes to musicians and their mothers, Dave Grohl’s mother, Virginia, and many others know quite a bit about this subject, and they know the uncertainty and the fear that went into the decision to support their kids when it was announced that their child wanted to become a musician. This six-part series kicks off first with Grohl and Dan Reynolds, the frontman of the band known as Imagine Dragons. Learning about Dan’s upbringing was more than a little interesting since those that watched the episode on Paramount+ will have learned that Dan grew up in a Mormon household and was 1 of 9 kids, which is a pretty big family no matter who you are. The tour of his home and the fact that the basement was where he and his siblings all grew up learning how to be musically-inclined was pretty fun to hear about, though one has to kind of grin at the idea that kids who play the piano are thought to be more intelligent. They’re more skilled and have a useful and enviable skill set, there’s no doubt about that. But by the time he was a pre-teen apparently Dan knew that he wanted a career in music, which is amazing since a lot of us can probably admit that we didn’t really know what we wanted to do during our high school years, much less when we were younger. But according to his parents and siblings, Dan was hooked on music and didn’t want to do anything else.

This was firmly established when he decided to take a semester away from Brigham Young University, where his siblings and parents attended school. His mother was supportive enough, but it’s fair to say that she was apprehensive as well since getting into the music industry isn’t a cakewalk. It can be every bit as difficult as any other profession and might be more so than others. The reality of becoming a musician is difficult to adequately describe without going through it, but going through the efforts of trying to be a successful author for so long and going down various channels to do it, there is some basis for understanding the struggle. The amount of work that Dan has put in over the course of his career though has been impressive and it’s been more than enough to get his band noticed and has treated him well. Behind the music though the bouts of depression that he’s dealt with have likely been largely ignored by his fans, or were never revealed in the first place. One might wonder how a person can be depressed when they’re such a success, but depression doesn’t care about status or wealth, as it can strike anyone for a number of reasons. As one can tell though, Dan has been able to work through his own depression for a while and has cited his mother as a big reason why this has been possible.

Dave Grohl and his mother have had just as strong of a bond as Dan and his mother, and it shows when they speak to each other. It’s very likely that she would have rather seen him step into a different style of music than Nirvana, but despite that, she’s supported him the entire way, and as a result, the bond between mother and son has been insanely strong over the years. If there’s one thing that can bring anyone back from the brink, it’s having a strong bond with someone that cares about them, cares about their welfare, and will always be there for them. There’s no doubt that a bond between a musician and their parents, mother, and father, is important, but for the sake of this show, we’ll be seeing the bond between the musicians and their mothers. The fact that the show seeks the input of the rest of the musician’s family is nice since it managed to give the audience a lot more information on Dan at least as his family sounded off about their upbringing and what Dan was like since he was the only one of them that went a completely different direction. It’s likely that his bond with his mother is different because of this since it sounds as though his siblings all have a strong bond with their parents, but that Dan has a very different relationship due to his career choice. Being a mother isn’t easy to start with, but worrying about a child that wants to become a musician has to be a little worrisome.