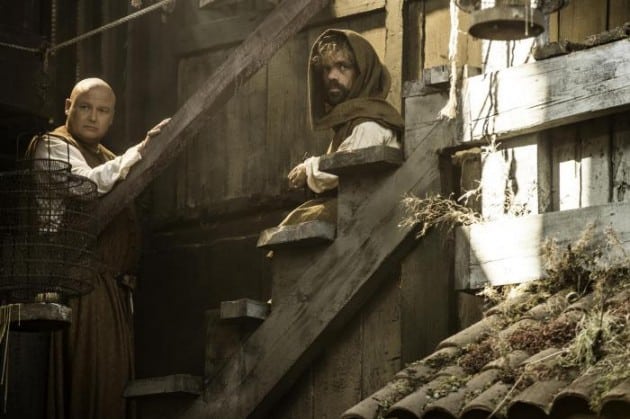 This week, we got our first real look at all the directions that Game of Thrones is about to go in Season 5, and how a great many of them are dramatically different than the books. Out of all the plotlines seen on the show, I’d say only one or two are staying very, very close to the original story, while others are adding or subtracting various book elements. Even though we’re only two episodes into Game of ThronesÂ Season 5, we’ve already seen some major alterationsÂ between what George R.R. Martin has written on the page and what David Benioff and D.B. Weiss are showing us on the screen. In the wake of last night’s episode, I wanted to go over a few of these specific changes in detail.

Tyrion, was of course, also going to try and visit Daenerys Targaryen in Mereen in the books, but this time he still has Varys with him for the foreseeable future. In the books, Varys disappears for a good long while until a surprise comeback later, but it seems as if he’s going to be sticking around for now given how well-liked his character is on the show. It remains to be seen if Tyrion will run into all the other characters he encounters on his journey. I have a hunch he will meet up with the exiled Jorah, but I’m going to guess they’re going to cut Penny the Dwarf. Old Griff and Young Griff seem too important to be lost completely, but no hints of them yet.

Now this is a great plotline that’s severely altered from the books. In them, Jaime goes to the Riverlands to deal with the remnants of the Tullys, and it’s a different member of the Kingsguard who is sent to Dorne. But now, given that no one liked either plotline, they’re being combined into one to hopefully make them better. The added bonus is that Bronn is coming alone with Jaime, a character who practically disappears from the books after he’s given his lordship. They hinted at him plotting to kill a few Stokeworths to secure that castle for himself (as he does in the books), but that might be on hold or nixed permanently now. 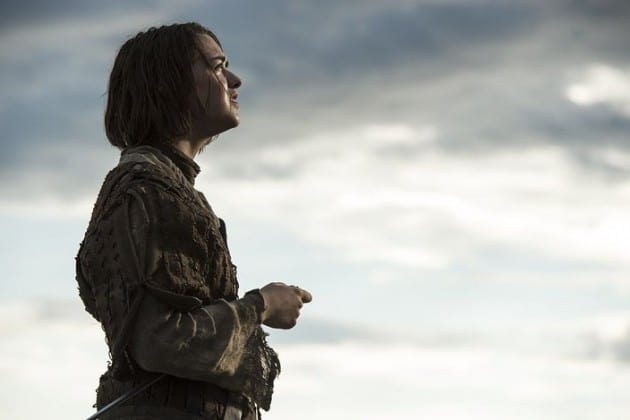 In the books, Arya also goes to Braavos, but there she meets a “kindly old man” who is the (multi-faced) leader of the House of Black and White where she trains to be an assassin. I thought that the fellow we might this week might fit that role (though he looked anything but kindly), but then we were shown that surprise! It was Jaquen H’ghar all along, or “No One” as he likes to call himself. I think bringing H’ghar bac is great, though this does throw a bit of a wrench into the books where it’s implied H’ghar shows up in Oldtown doing shady things at the Citadel, which seems to be an important development. But whatever, I’ll trade that for Jaquen-Arya training any day.

These four characters are caught in a weird non-book zone that lies somewhere between their plotlines not yet being finished, and already being over. As weird as that sounds, it’s the only way I can describe their predicament. Both groups meeting never even came close to happening in the books, so it remains to be seen how that situation will resolve itself. I’m hoping Littlefinger will approve Brienne’s bodyguard status after seeing she was skilled enough to slay his guards, but who can tell with him? Mostly, this feels like uncharted territory, given that Brienne isn’t going to run into Stoneheart, and Littefinger has already left the Vale where most of his end-book scheming was done.

Now we arrive at perhaps the only plotline that’s sticking somewhat closely to the books, albeit one that’s moving much more quickly than it did there. Jon is given the impossible choice between becoming Jon Stark and helping Stannis rule the North as Lord of Winterfell, and becoming Lord Commander of the Night’s Watch. To his credit, even before his election, he was already going to turn Stannis down because of “honor,” and now his story will continue to play out roughly as it does in the books.

Daenerys’ adventures in ruling was kind of a slog, and it’s hard for me to even remember if things are playing out exactly as they do in the books. Regardless, the entire point is that there is unrest in Mereen and the rest of the region because of her actions, though the exact names and faces of the troublemakers may chance. I don’t remember that execution happening, for instance, but nor could I tell you that guy’s name in the show. Hey, at least we got to see Drogon again.

That’s all for now, see you next week!