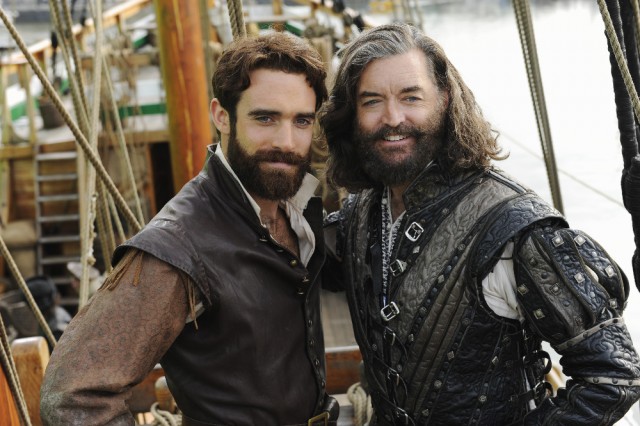 Way back in days of old, there was a legend told, about a show unlikely to be renewed for a second season. After defeating the odds against the cancellation bear,Â Once Upon A Time‘sÂ hiatus filler show,Â Galavant,Â has returned for thatÂ second season (as aptly acknowledged in the title of Episode 1). Like last year, they’re technically doing two half hour episodes each week, and they’re airing back to back to fill the hour long slot. Instead of a four week “extravaganza” like last year, they’re doing a FIVE week “extravaganza.” I’m not mad about it. These first two episodes (or one episode, depending on how you choose to look at it) putÂ Galavant’sÂ sophomore run off to a strong start, with music and comedy galore.

This week on the premiere ofÂ Galavant:Â Galavant and King Richard make their way back to Valencia so Richard can get his kingdom back and Galavant can rescue Isabella. Madalena and Gareth try to rule Valencia together, with Sid as their new assistant. Isabella is trapped in her own kingdom, awaiting Galavant’s rescue before she is forced to marry her 11 year old cousin. The Chef (Vincenzo), Gwynne, and the Jester all adjust to their new roles in Hortencia. Guest stars include John Stamos, Hugh Bonneville and Kylie Minogue.

I won’t have to remind some of you that I was a big fan ofÂ Galavant’sÂ  first season. It contained whiffs ofÂ Monty Python,Â Shrek, The Princess BrideÂ andÂ A Knight’s Tale, while remaining wholly original to its platform. I’m proud to say that Season 2 (to this point) feels largely the same. It’s obviously expound upon the world it has created, and introduced some new relationships and character pairings to boot, but it’s very much the same show. It’s funny, the music is creative and well written, the characters are compelling and most of all: it’s fun! It’s a nice change of pace, asÂ OnceÂ doesn’t often bring the laughs.

All the performances given were pretty impressive, both musical and otherwise (Vinnie Jones singing is reason enough to watch this show, by the way), but Timothy Omundson’s Richard has really found his comedic groove in these Season 2 sampling. A fantastic departure from the evil Cain (Supernatural) or the straight laced Carlton Lassiter (Psych),Â Richard’s comedic naivety makes for lots of laughs, and you’ll see from my favorite quotes just how many!

Last year I picked my favorite quote and favorite song. This season, I’m going to do a favorite quotes/moments segment that I do with most of my comedy reviews (see below), but I will still pick a favorite song. This week’s two episodes made it tough, but the obvious choice was Galavant and Isabella’s “dream” duet (and title of episode 2) “World’s Best Kiss.” This comedic love song lampooned those stories that teach “true love’s kiss” and takes off on the idea that the only kiss Galavant and Isabella ever shared was sloppy and kind of awkward. Though it was written in love song format, which makes the lyrics both surprising and hilarious. Of course, Joshua Sasse and Karen David handled the music brilliantly, and this was probably the only song in this week’s bunch that was wholly well executed (though all of them were great).

Here are some of my favorite quotes/moments from the episode(s):

This was a strong first installment of 2016’s “extravaganza”, and a great way for ABC and TV in general to kick off the new year. The writing is clever and quick witted, the music is strong and the lyrics are sharp, and the cast grows more and more comfortable as a unit, makingÂ Galavant as strong as any comedy package on television today. It’s a silly blast, and I loved every second of it.

What did you guys think? Did you enjoy the return ofÂ Galavant? Let us know in the comments!