Home
Galavant
Galavant Season 2 Episodes 9 & 10 Review: “Battle of the Three Armies”/”The One True King (To Unite Them All)” 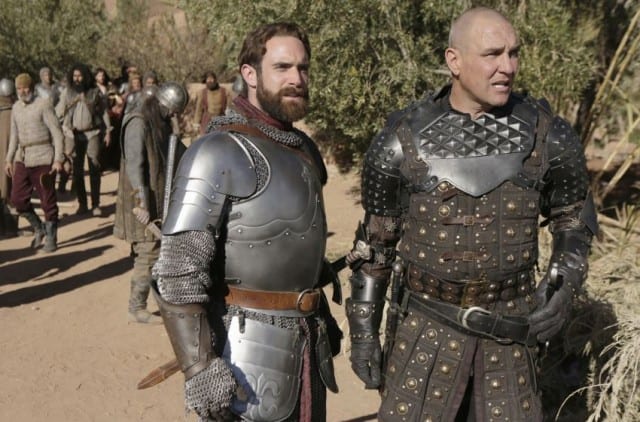 Happy endings are underrated nowadays. Everywhere you look, dark, gritty dramas have overtaken the TV landscape. Don’t get me wrong because there’s appeal to that and a place for that, but it seems that happy endings are few and far between. Fortunately, for the likes of us, there are shows likeÂ Galavant.Â Galavant riffs on popular culture from every direction, and is sometimes overrun with musical numbers, but the characters are beyond lovable, and the value of a happy ending is appreciated.

This week on theÂ GalavantÂ finale: Galavant and Richard arrive with the zombie army just as the battle between Hortencia and Valencia begins. Madalena wrestles with and eventually gives into the dark magic, so Gareth abandons her. Using the dark magic, Madalena and Wormwood turn the zombie army against the others, who join forces. Sid arrives on the scene with some of the characters they met along the way. Richard discovers his inner hero. Galavant and Isabella reunite.

I’ve been so pleased with this season ofÂ GalavantÂ as a whole. I really appreciated that they were able to expand their world and explore all of these new characters and relationships, while still staying true to the show’s spirit and format. It’s always been kind of a televisedÂ Spamalot/ShrekÂ mashup, with a tremendous appreciation for all of the things it riffs on. The comedy is silly (which is right up my alley), the actors handle it wonderfully, and it’s simply been a delightful way to spend the past 5 Sunday nights.

Season 2 ofÂ GalavantÂ has reminded me of a show that I will always hold dear,Â Community.Â There are a lot of throwaway gags and “blink and you’ll miss them” meta references that really enhance a show for re-watching.Â Galavant has balanced all of this clever humor and writing with some outstanding musical numbers, which only add to the fun and hilarity.

In terms of these finale epsiodes, I was particularly pleased to see some of the immense character growth paid off in this episode. Richard, who spent Season 1 as a “man who cried when he got jelly on his fancy pants”, became friends with Galavant, fell in love, and became the “One True King”. What was fascinating about this transformation is that Timothy Omundson carried the same spirit of the Richard character throughout the show. He’s still a little bit silly and weird, but there was some tangible growth there.

Though none were as pronounced as Richard’s, the other transformations were equally impressive. Isabella took charge of her kingdom and became a fantastic warrior. Madalena took a nosedive into the pool of evil. (How great are Karen David and Mallory Jansen by the way?) Gareth fell in love, and valued friendship underneath his tough exterior, and expressed himself through song!!Â GalavantÂ is a special kind of show because it really builds the characters and makes you care, even if the comedy and songs would get people to watch.

This show tugged on my heartstrings, made me laugh, and happily had me tuning in each week to enjoy some “Comedy Extravaganza”. The cast is strong, the funny moments are funny, the music is excellent, and it’s a gosh darn compelling story. Hopefully, they will defeat their enemy, The “Cancellation Bear” and return to us in January 2017 for another extravaganza. I would be satisfied with the ending here, but I just really REALLY hope it’s not over.

What did you guys think? Did you enjoy the finale? Was this a fitting end to this year’s “extravaganza”? Let us know in the comments!