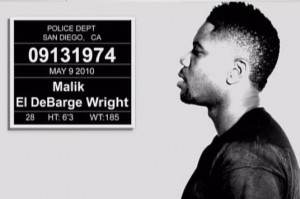 For the past four episodes of The Game, we have wondered what the hell happened to Malik Wright in the two year absence before this season. While last night finally answered that question, it still left us wondering how did Malik get to the state that he’s in now.

The Fall of Malik Wright

We knew Malik’s arrest wasn’t going to go well or be swept up under a rug to be dealt with later. What we didn’t know was this pseudo-conspiracy that’s forming behind his back to get rid of him, which makes us (mostly me) wonder if the arrest was actually even a coincidence after all. Now there is two ways to take this so-called conspiracy, since it’s something I’m not completely sold on just yet. Number one, Malik clearly has a problem and that problem is alchohol, which brings me back to my original question of what brought this on? Access to excess? An undisclosed event that took place in the two year gap?

Like I’ve said in previous reviews, Malik has known to have been wild, but now most of his actions have been motivated by some deep anger that has manifested into a monstrous being hellbent on self-destruction. He’s tainted goods at this point that even Tasha and Derwin don’t want to have anything to do with him professionally, which was pretty harsh despite the laugh track behind it. So with all this on the table, maybe the new Saber owner Roger Keith sees Malik sees this as a huge problem for the image of his new venture and wants to nip it in the bud now while he has the chance. It’s the only way Parker could be privy to such knowledge about Malik’s future in the game of football.

If that’s not the case, then there is the possibility of Roger knowing about Malik and Parker’s tryst behind his back and wants retribution for being played like a fool. Roger did claim to have city officials and cops in his pocket, so it wouldn’t be too far fetched an idea for him to go after Malik by taking away his career. But is it really that crucial?

Then there is the simple solution to this whole storyline: Malik is about to basically atone for all his past transgressions and probably make that much needed transition to manhood that he desperately needs. With that said, it wouldn’t be a surprise if Malik’s storyline will be a combination of all three theories in a literal and metaphorical state. Whichever way it falls, it will be interesting to see how this journey pans out.

The Rise of Derwin and Melanie Davis

Derwin is on top of his game obviously and he’s only going higher with his career. On the flip side, will he have to sacrifice his soul to do so? This question can also be applied to Melanie, who is a complete 180 when it comes to the Melanie we grew to know and love. Like I said in my previous review, Melanie has assumed Kelly Pitt’s position in being about her man and her man’s career. It’s a bit jarring and still is taking a bit of time to get used to, but hopefully Melanie and Derwin won’t let the game turn them into the people they swore they would never become.

As for Derwin not showing up for Malik like he promised he would? That will hopefully be addressed, but with Janay already planning to take him to court, will Derwin be able to manage all of the pressure coming at him from all cylinders?

– Glad to see that the writers knew they had Jason in their back pocket for use, because I was getting a little worried there. Now, if they can fish Kelly out as well then all would be peachy keen.

– With eight episodes left, will the writers have time to tie up all the plot threads introduced so far in a sufficient gradual manner? I’m praying they will. If not, then I highly suggest they ask to be transitioned into an hourlong format for Season Five.

Okay peeps, so who is still in The Game and who has tuned out? Would like to know why on both sides of the argument.