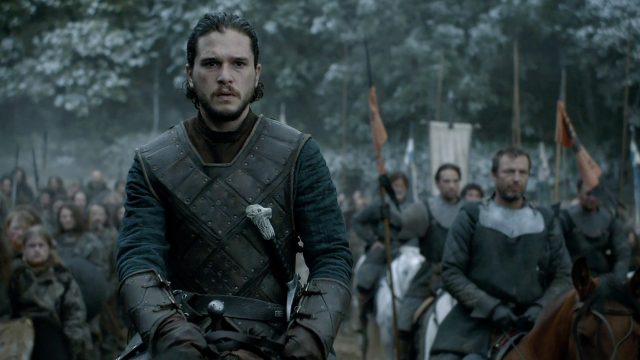 With Dany and Sansa asserting their positions of power in Westeros, “Battle of the Bastards” takes the long route on following the course ofÂ Game of Thrones‘ rejuvenated sixth season, bringing its transformation intoÂ GoT: The Next GenerationÂ full circle in what amounts to a fun, if slightly anticlimactic hour of battling (and not-raping, of course – good job, Dany!). While there’s a few hiccups on its way to delivering its climatic moments, the fight for Winterfell and Meereen both help push Westeros into a new age in dramatic fashion.

Simply put, the battles themselves are staged beautifully: Meereen delivers some wonderful visual spectacle with the aerial shots of Draconus and company lighting the slaver’s fleet on fire. Greyworm kills two guys with one swipe of his arm, Dany and Yara flirt and realize how similar their lives are, and a whole lot of horses put an end to the Sons of the Harpy nonsense: it’s undeniable how satisfying it is to see all of these stories finally come to an end, dislodging Dany from the plot spinning wheel she’s been on for five seasons with a few waves of a dragon’s wing. However, it all happens so fast – she’s back, they’re winning, everyone’s dead, and all of a sudden Dany’s got multiple armies and a decently-sized fleet of ships – that it’s nigh impossible for these moments to be exciting within the context ofÂ the episode, whose title announce its true allegiance before a single minute airs.

It leads to emotionally contradicting moments in the episode’s first act: the increasingly complex politics of Meereen are dispatched in a moment, a conflict simmering for two seasons ending with a few flashy CGI images during arguably the weakest attempt at a siege Westeros has seen during the course of this series. There’s a certain straightforwardness to it all that robs some of the intrigue that’s built around these moments for seasons: Theon finally finding a place in the world, Dany finally seizing power in a meaningful way, and Tyrion finding a way to survive once again are all meaningful dramatic moments forÂ Game of ThronesÂ – and yet, with one eye turned towards the battlefields near Winterfell, Dany’s re-conquering of Meereen is thoroughly less dramatic and nuanced than expected.

That odd, unsatisfying feeling of inevitability creeps its way into the massively entertaining battle for Winterfell as well, due to some disturbing parallels to Dany’s story. The setup to the climatic moments of battle are certainly satisfying; “Battle of the Bastards” is at its best when working towards its ‘signature’ moment, as the bodies pile up around Jon and his assemblage of armies, cornered Roman-style against Ramsay’s men until Littlefinger’s Knights of the Vale arrive last-minute to save the day, and secure a victory for two of the remaining Stark children (oh poor Rickon.. as useless in death as he was in life). Like Dany’s fight for Meereen, the complex political and emotional situations around the battles seen in this hour are stripped of their nuance, all in favor of the same late-act twists we’ve seen multiple times on this show, which undercuts a lot of the amazing cinematography and performance put into everything that comes before them.

I’m talking, of course, about Dany mounting a dragon and a secret ally showing up late in battle to turn the tide: both of these moments are onesÂ Game of ThronesÂ has relied on multiple times in the past, which turn two of the show’s most momentous, driven developments of season six into unsatisfying climatic moments. It appears that even in the new world of Westeros, the old tricks still reign supreme: an unspoken ally will ensure a dramatic late battle shift, while the sight of Dany’s dragons completely freezes anyone trying to pick a fight with the ol’ Beggar Queen. It’s odd how light the emotional impacts of these battles are, even as they push beloved characters into new and exciting places: seeing two of the season’s climatic battles play out the same way we’ve seen so many others before them is a bit of a letdown, even if it comes with the disposal of the slave traders and Ramsay in one fell swoop.

There’s no denying the mastery of cinematography in “Battle of the Bastards” – and given how well this season’s built to these moments, the sheer release of tension in Dany and Sansa’s story lines for a moment is a welcome development during this extremely busy season. But it doesn’t exactly make the climatic moments of these long-developing fights anywhere near as satisfying as watching Sansa feed Ramsay to his dogs, aÂ moment that makes theÂ HannibalÂ fan in me squeal with joy (Margot Verger 4Ever). As simplistic and straightforward as that moment is (also, pretty foreshadowed throughout this season), it brings a troubled chapter ofÂ GoTÂ to a close in a visceral way even the most claustrophobic, bloody moments of the Battle for Winterfell couldn’t match.

And in a way, that speaks to how well this season’s worked on a character level: there are plenty of plot-driven moments in this season that don’t exactly come to a head in exciting, unpredictable fashion, as we’ve grown accustomed to onÂ Game of Thrones. The character work behind them, though, helps disguise a lot of these problems: as f*cked up and pointless as the Faceless Men story turned out to be (save for the most obvious, literal metaphor it provides), there’s no denying how awesome it is to watch Sansa leave Braavos after declaring herself a Stark again.

Oddly enough, the more the social and political dynamics of Westeros changes, the more traditional the plot twists and battle climaxes get: secret allies showing up last minute, dragons showing up on perfect dramatic cue… the list goes on and on. That doesn’t deny “Battle of the Bastards” from being a perfectly entertaining, dramatic hour in its own right – but the most powerful moments of those come far away from the moments that will define character legacies and stand as the iconic images of the season’s biggest hour. When I think of “Battle of the Bastards”, I’ll think of Jon Snow’s luck, Dany and Yara shipping, and Sansa’s victory walk to close the hour: as impressive as the battlefield dramatics were, it’s those rewarding, unexpected moments that shine much more than the flashy battles that will be remembered. Perhaps that makes this the most fittingÂ Game of ThronesÂ episode of them all, a reminder that the battlefield is forever ugly, anti-climatic, and predictable, and it’s only outside of war that we actually have hope to evolve, and surprise the world.

Game of Thrones Season 6 Episode 9 Review: "Battle of the Bastards"

The powerful character moments of “Battle of the Bastards” outshine the flashier, more predictable developments of season six’s penultimate hour.