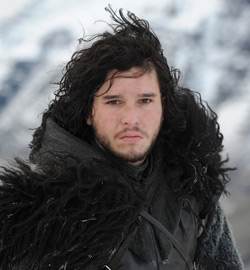 There’s only three more episodes left in this season of Game of Thrones and the season is leading up to the big Battle of Blackwater, which will take place next week. Until then, we’ve got a few more twists to enjoy.

Theon: In the last episode, Theon was furious to discover that Bran, his brother and two allies had escaped Winterfell. He set up a search party to hunt them down. At the end of the episode, he presented the burned and dead bodies of two young boys, telling the people of Winterfell that he had killed the Stark boys. We’re guessing it was a big fake-out that could very well come to haunt Theon in the long run. In tonight’s episode, Theon continues to hold down the fort and receives a visitor.

Jon: Jon continued to travel with wildling Ygritte, while she continued to bait him and act like a general nuissance. But it turns out that she’s very clever. By the end of the episode, she had managed to escape and get Jon captured by her people. Tonight, Ygritte brings Jon before her leader as a prize.

Arya and Tywin: Arya continued to impress Tywin in the last episode of Game of Thrones, while piquing his interest as to her true identity. Tonight, Tywin prepares to depart Harenhell, prompting Arya to call in her last favor from Jaqen.

Daenerys: Desperate to find her missing dragons in the previous episode, Dany went before the council of Qarth, but was shocked when the lord of the House of the Undying slaughtered most of the other members of the 13. Jorah is determined to take her out of Qarth today, but Dany refuses to leave without getting her dragons back.

Stannis and Davos also reappear in tonight’s episode, as the pair and their army approach their destination.

Watch a preview below for tonight’s Game of Thrones, airing at 9:00 p.m. ET/PT on HBO. You can also watch a video recap of the previous episode as a refresher.