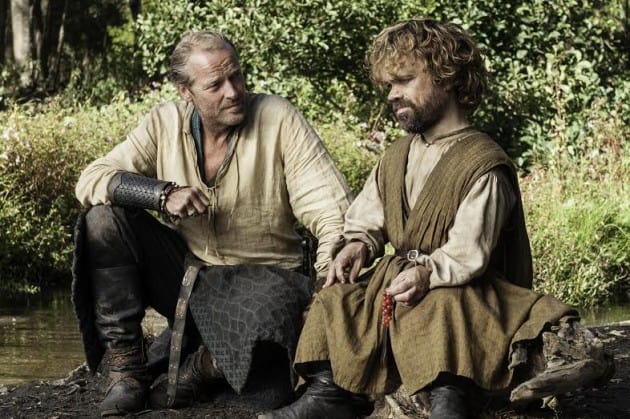 Truth, like anything else in Westeros, is a valuable currency. It holds the key to honor or shame and the power to start and end wars. And that’s only its external power; the value of truth in understanding oneself is imperative as well, something the last two seasons ofÂ Game of ThronesÂ has particularly focused on, as long-surviving characters evolve and survive.Â Beginning with Arya and ending with Sansa, “Unbowed, Unbent, Unbroken” is an episode that explores that quest for inner truth; unfortunately, it does so by leaving the audience with another troublesome and particularly unnecessary depiction of sexual violence, throwing a wrench into any assumed progress the show’s made in that department this season.

Coming into an arranged marriage, there was bound to be some uncomfortable moments in the closing scenes of tonight’s episode. At first, “Unbowed” appears to be capturing this perfectly, watching a supposedly fearless (as she proclaims to Ramsay’s jealous lover) Sansa enter into her wedding chamber with her new husband. The impending consummation weighs on Sansa’s mind, much like it did the last time she got married; yet with Ramsay Bolton in the room grinning, asking her if she’s pleased, that fear takes on a whole different energy. And in that scene, that potential moment of strength for the character, “Unbowed” undoes it with a series of unpleasant shots and sounds, literally ending on the screams of Sansa as Ramsay forcibly rapes her, while making Reek watch from the doorway.

The moment Ramsay asks Reek to stay, “Unbowed” felt like it was going toÂ thatÂ place again, forcing this story of sexual assault onto Sansa for nothing beyond shock factor. There’s no reason Sansa needs to be subjected to this to depict her “toughness,” or Ramsay’s inherent ugliness; if the wedding bed scene is just existing to reinforce the assumed order of things in Winterfell, without offering any character development with it, why is it there? The only reason seems to be in the name of throwing viewers for a whirl, an unnecessary reminder ofÂ how “dark” the world of Westeros can get, especially in a world where men marry off their daughters to strange, sometimes mentally unhinged men for political reasons. And if it’s anything like the last few uncomfortable sexual experiences we’ve seen depicted on the show, it’s not something Game of Thrones isÂ going to follow through on, to make the event mean something to the characters in future situations. This is a rape scene for the sake of having a shocking rape scene, and it drags down the entire episode behind it.

Not that what precedes it is really anything interesting. Full of allusions and nods to what may or will happen, “Unbowed” suffers from studying characters in transition; the only time the episode really takes grip and becomes a compelling watch is in Arya’s time with the Faceless Men, entering the room where all the dead men (and their faces) are brought after Arya and her creepy classmate (cult mate?) wash them from head to toe. I really like how “Unbowed” mirrors Arya and Sansa’s self-examination in the episode; however, with Arya’s story bogged down in vagueries and the unpleasant proceedings of Sansa’s wedding day, the connections between their stories are more alluded to than expounded upon (like the distinct shots of hair being washed into a bowl in both their scenes). Arya’s story continues to be visually engaging, but it does feel at times the show is stretching small bits of material over the course of the season, which leads to a lot of repetition when it comes to her activities, andÂ those around Arya informing her (or to be more accurate, deliberately failing to inform her, and by proxy, the audience).

While Sansa and Arya are testing the limits of their inner strength, the rest of “Unbowed” approaches the idea of truth in a different light, exploring the political power of the idea as power plays occur in Dorne and King’s Landing, with Martells and Tyrells and Lannisters alike trying to use the suggestive power of words to garner favorable attention from the gods and people they serve. And both stories fall short from the same problem: with so many characters old and new to occupy scenes, they take a pretty myopic approach of the two women (Cersei and Elleria Sand) and, bydepicting their various attempts to manipulate events and ideas to their favor, undercut some of the tension these scenes are trying to create. In particular, the Dorne scenes feel underdeveloped, the Sand Snakes handcuffed by the little time we’ve spent with them before they’re arrested for a failed kidnapping of Myrcella – and for a trio of women who are supposed to be feared for their combat skills, watching Jaime easily fight them off after bumbling around the other week against random men is glaringly inconsistent (not to say feels uneasily aligned with some of the show’s sexual/gender politics, for all the strong female characters it brings to the table).

There’s usually an episode or two like “Unbowed” in each season ofÂ Game of Thrones, and I don’t just mean it features a scene that’s going to inspire a thousand think pieces over the next 24 hours (even though it certainly has that). With so much land and people to cover, there are episodes of Game of Thrones that are bound to feel a little more disjointed and underdeveloped than others. It’s just odd to see it happen with an hour focusing on such strong characters like the Stark sisters or Tyrion/Jorah (Jorah’s reaction to his father’s death is by far this episode’s strongest moment), in the middle of what’s been the show’s most focused season since its freshman year, and featuring an ending that evokes memories of arguably the show’s single worst scene.