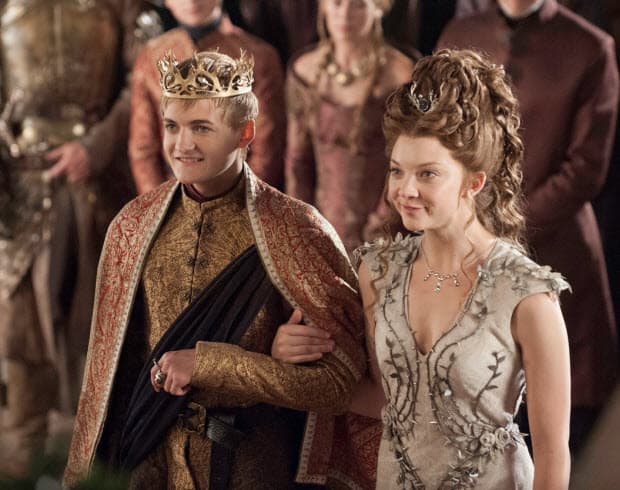 With dozens of characters, locations, and stories to juggle,Â Game of ThronesÂ is not a show that slows down often – so when the camera lingers on one place or event for more than four or five minutes, it’s usually for something really, really important (see: Ned Stark’s trial, Battle of Blackwater, The Red Wedding, etc). Over time, that dichotomy in pace has actually worked to the show’s advantage: when things are moving so slow it almost feels like slow motion, the growing dread that comes with each camera cut and character reaction becomes an effective tension-building tool, even though the show’s tipping its hand thatÂ something is about to happen.

“The Lion and the Rose” is a perfect example of these two styles: the first half spends its time bouncing around, stopping in King’s Landing, pausing briefly at the Bolton’s home base, and checking in on Brann and his merry band of northern-bound travelers. But halfway through the episode, all of these things are put on the shelf to focus on the titular event: the joining of House Lannister and House Tyrell at Joffrey and Margaery’s majestic, expensive wedding at the Capitol.

Known in book circles as The Purple Wedding, Joffrey and Margaery’s wedding isn’t just another shocking twist to the War of Five Kings (which isn’t over just yet, so we can put the costumed midgets away for now) but a testament to how effectively the show’s built Joffrey’s character over four seasons. For thirty-plus episodes we’ve watched him act like a petulant child, refusing to mature and accept responsibility for anything, even as a war raged around him and thousands bowed to him for direction. Thanks to an overprotective mother and a controlling grandfather, Joffrey never became an adult, merely a dangerous, violent child given sharp adult toys to play with, and enough power that nobody could challenge him, not even his own family (“The dwarf and the cripple!” Tyrion toasts to his uncle the night before in his chambers).

George R.R. Martin (credited with this week’s screenplay) has a ball writing Joffrey’s last episode, sucking every single bit of immature arrogance out of Jack Gleeson’s severely underrated performance with meticulously-paced scenes. Like every single member of the royal family (and those in its vicious, tornado-like reach), “The Lion and the Rose” tortures the audience with Joffrey’s grating, disgustingly superficial approach to life, as he rips apart Tyrion’s gift (The Four Kings, a book about… four kings)Â with Widow’s Way (one of the two swords Tywin made with Ice), and prances around, torturing his “little” uncle while continuing to remind us all what an unforgivable ass he is.

“The Lion and the Rose” reminds us over and over what a child he is, never more effectively than when he parades out the aforementioned dwarves to perform a “dramatized” version of The War of Five Kings. Not only is the Lannister representative dressed like him (something Tyrion so cleverly reminds him), but there’s homophobic jokes made about Renly and Stannis, all culminating in the Joffrey counterpart performing lewd acts on the “head” of the Stark family, all to Joffrey’s enjoyment. He’s a child playing with his dolls: and of the many thingsÂ Game of ThronesÂ punishes, there’s nothing more unforgivable than forgetting who you are.

Knowing that, it’s fitting that Joffrey dies drinking wine, a wholly “adult” activity: no sooner is half a glass of wine in his system than he’s lying on the floor, convulsing and bleeding out of every orifice in his face. How “The Lion and the Rose” builds to it is even more fascinating, though: as the wedding reception plays out, the “happy” event is already falling apart, another bit of foreshadowing that something was going to go wrong. Olenna mentions to Tywin that the Iron Throne is broke (in debt to the similarly-titled Iron Bank), a conflict mentioned in passing that represents the lavish wedding reception getting ready to fall apart under the many weights of the debts the Lannister’sÂ haven’tÂ paid yet (in fact, many are debts being repaid to debts the Lannisters “paid” themselves initially, if you think about it).

From that moment, “The Lion and the Rose” lets Joffrey the Prick (as he shall forever be remembered in these reviews) poke at every angered member at the wedding, from the Tyrells and Martells (two houses whose names sound way too familiar to be sharing a single location for an extended period of time) to Sansa and the members of his own family, angered by his incessant antics at the wedding. The camera frequently jumps back and forth between Joffrey and these other parties, his grins met with stoic, unamused faces in the crowd and behind the royal table.

It creates this thunderous narrative and visual effect: those small swells of anxiety that something horrible is about to happen is exacerbated by the constantly changing perspectives, each cut and camera shift revealing that Joffrey is surrounded by nothing but darkness, a darkness he can’t even see because of his childish ignorance and naivety in war-related things (chopping up the book with a sword could not be a more fitting symbolic act). Most importantly, those who don’t appreciate things inÂ Game of ThronesÂ are punished: be it vows, companions, simple joys (ask Theon – pardon me, Reek – about that particular one), or life, the latter of which Joffrey’s showed a particular disrespect for – and the more he tramples on the houses surrounding him at his reception, the more it becomes clear justÂ whoÂ “The Lion and the Rose” is going to punish, even when it appears Tyrion (who is pretty upset after sending Shae away on a boat to Pentos) is the one suffering.

Every dog gets their day inÂ Game of Thrones, though: and Joffrey certainly has his, dying in the arms of his mother as she accuses Tyrion of poisoning her son. Everyone else looks on stunned, and the episode closes on Joffrey’s emaciated, blank face, all color removed from his skin except the faint blue of the veins in his face. Already in a foul mood (she takes cheap shots at Margaery’s new position, undermining her when everyone keeps pointing out she’s theÂ formerÂ Queen of Westeros), Cersei’s smile at Tyrion’s public shaming turns to a scowl as she looks at an incredulous Tyrion studying the wine cup (the contents of which were recently spilled on his head, confounding him further). Forget spilling the beans on Shae to Tywin; the death of Joffrey almost works to Cersei’s favor, removing the new Queen from her positionÂ andÂ allowing her to admonish her hated sibling to the dungeons, until his sentencing (which, in King’s Landing, will probably happen rather quickly).

The ultimate lesson of “The Lion and the Rose”? Like characters talking about “dragons not existing” or “magic being gone from the world” (or constantly reminding everyone how you never forget your debts), saying that “the war is over” can only mean one thing: there’s a battle on the horizon that we just can’t see yet. One of the cornerstones ofÂ Game of ThronesÂ is that everything,Â everythingÂ exists in the grey: the morality (and in some cases, mortality) of men, the idea of “honor”, and the true nature of influence and how much “power” it can yield. Everything is complex and entangled, be it the physical construction of a godswood tree, the emotions of a human being (even though she hates Joffrey, Sansa’s still jealous; “Looks like we have a new Queen” she snidely tells Tyrion), or the loyalties of a sellsword. The only way to survive in Westeros is to embrace this complexity: allegiances to any one idea, characteristic, or frame of mind only lead to harsh punishment, a lesson that rings even truer as another supposed King meets his doom.

– we get a peek at the Bolton family dynamic as Ramsey the Crazy Bastard Child brings his pet Reek in to show his father, who isn’t so happy. I get the feeling he sends him off to his death with his attempt to capture a northern moat; if Ramsey (who opens the episode by hunting a young girl and letting her die by being ripped apart by dogs) actually wins, that’s just an added bonus. What he’s done to Theon (excuse me, REEK) is a terrible, terrible thing.

– speaking of Reek, the shaving scene was devastatingly tense. So well-acted and directed.

– Brann’s worg-ing out a little too much. His companions give him a reminder that every character should heed: the more he adops the identity of his wolf Summer, the more he loses touch with himself. The longer these characters pretend to be something they really aren’t (like Joffrey a King), the more they lose a grip on themselves – and not knowing who you are in Westeros is the easiest way to get yourself killed (just ask ol’ Eddard about that one).

– Varys: “No one weeps for spiders or whores.”

– Melisandre’s convinced some people to sacrifice themselves (by burning alive) for the Lord of Light, an influence she’s trying to now wield on Stannis’ daughter. one thing she’s not interested in? Domestic talk with Stannis’ talkative, overly enthusiastic wife.

– Davos gets 20 seconds of screen time, to complain about Melisandre again. This guy is a broken record with great facial hair.

– Tyrion, upon hearing foreigners can’t join in on the wedding feast: “Oh, to be foreign.”

– another fun regional detail of Westeros: in Dorne, bastards are given the surname Sand (as opposed to Snow), and are welcomed as part of the family (“I have over 10,000 brothers and sisters.”)

– Everyone loves Bowing Brienne, except Cersei of course. She accuses her of being in love with Jaime (which… c’mon, does she really have to be?) and of not having loyalty to anyone (though in her defense, everyone she swears herself to has died soon after).

– Jaime and Bronn should be a fun pair to hang out with this season (if the show ever has time to return to their secret training sessions).

– looks like Sansa’s heading out on the run; maybe they’ll finally make her character useful!

– Melisandre: “There’s only one hell… the one we live in now.”