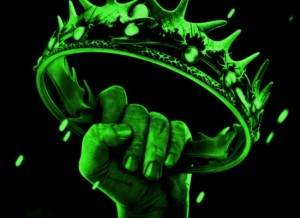 Game of Thrones ended its second season on Sunday (you can read a review of the season finale here). And while season 2 ended with a pretty scary bang, the bad news is that we have to wait until spring 2013 to see more. That means ten long months stand between us and the finale. It’s a thought even scarier than the Others — but we’re here to give you something to look forward to.

For those of you who haven’t read the books and are looking for a little tease, we’ve compiled some clues about where your favorite characters will be seen next season. Don’t worry — the spoilers here are of the very mildest variety, intended only to hint and not to tell. And, let’s face it: we’ve got a very long wait ahead. Why not take a peek?

We kick off with our list on the next page. Click the arrows down at the bottom to get started. Valar morghulis. 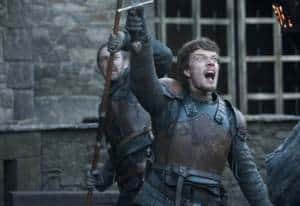 Where We Saw Him Last: Being betrayed by his fellow Iron Islanders, who give him over to the host of Northmen surrounding Winterfell.

Where We’ll See Him Again: There’s no guarantee that we’ll see Theon for a while — he doesn’t pop up again until the fifth book. It’s conceivable — even likely — that the show might give him the Robb Stark treatment and expand his storyline for the show’s fifth season. But know this: Theon’s about to have a very bad time. 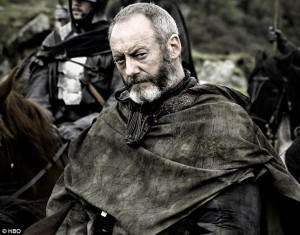 Where We Saw Him Last: Getting caught in the blast of Wildfire during the Battle of Blackwater

Where We’ll See Him Again: Worry not, for it takes more than a blast of fire to kill the Onion Knight. Davos is still very much alive, though he suffered great loss as a result of the botched battle. He’ll be back in Stannis’s service before long. But he’s still at odds with Melisandre, and that will test his relationship with Stannis, pushing it almost to the breaking point. We’ll also get even more of a glimpse at Davos’s skills as a smuggler. 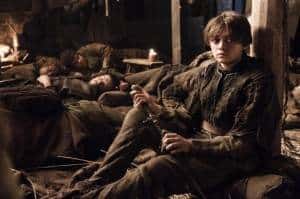 Where We Saw Her Last: Having a final meeting with Jaqen H’ghar, who gave her advice on how to become an assassin.

Where We’ll See Her Again: Arya’s back on the road with Gendry and Hot Pie, though it’s naturally going to be a pretty difficult undertaking to reunite with any of her family members. Early on, she’ll run into a very interesting new character, along with a Red Priest — that’s right, like Melisandre, except a guy. Arya will also meet a familiar face who is traveling on the same road — though not exactly someone she’d hoped to see again. 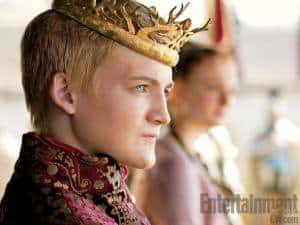 Where We Saw Him Last: Annulling his betrothal to Sansa Stark and becoming engaged to Margaery Tyrell.

Where Will See Him Again: If you were hoping that the entrance of “love” into Joffrey’s life would serve to tame him, you should have known better. Joffrey’s going to be worse than ever. As Littlefinger warned, he can now abuse Sansa without her having to be the future queen, and he doesn’t have to listen to Tyrion now that Tyrion’s no longer the King’s Hand. No, Joffrey’s only getting worse. And what about his upcoming wedding? It’s looking likely that it’ll be happening in season 4, not 3. 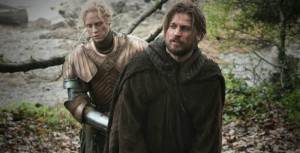 Where We Saw Them Last: Dispatching of some particularly sadistic northmen while on the way to King’s Landing.

Where We’ll See Them Again: Nothing is ever simple on Game of Thrones, and the journey to King’s Landing will be fraught with plenty of turmoil for Westeros’s Odd Couple. They’ll run into more violent gangs on the road, and they won’t be as easily dispatched. Jaime’s going to lose something very important to him before their journey is done. 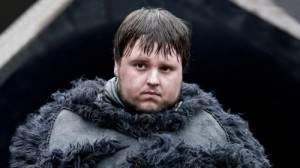 Where We Sam Him Last: Presumably wetting himself as the Others led an army of Wights past him to attack the Night’s Watch encampment.

Where We’ll See Him Again: The Other, presumably not seeing Sam as a threat, let him live. But surprisingly, Sam is a threat, thanks to his archaeological skills witnessed earlier this season. But the Others and the Wights, while a threat, aren’t the only threat Sam faces while north of the Wall. 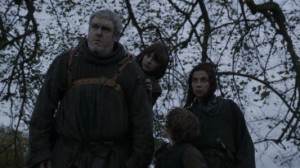 Where We Saw Them Last: Heading north from Winterfell to the Wall at the behest of Maester Luwin after the sacking of Winterfell.

Where We’ll See Them Again: Bran’s still having dreams about the three-eyed crow, who turns out to be pretty important. Bran’s group will divide for safety, though Bran’s going to meet some new friends, Jojen and Meera Reed, who will help guide him along his journey. He’ll also meet a familiar face on his journey, as well as a mysterious new one. 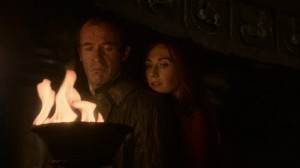 Where We Saw Them Last: Licking their wounds after a devastating loss at Blackwater. Stannis’s confidence was renewed after Melisandre showed him a vision in her fires of him being king.

Where We’ll See Them Again: Melisandre’s going to continue to work her crazy magic, which is going to result in Stannis being forced into some pretty uncomfortable quandries (can you say “blood rituals?”). As mentioned before, Stannis’s relationship with Davos grows strained as Stannis desperately struggles to remain a contender for the Iron Throne. 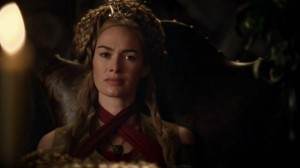 Where We Saw Her Last: Encouraging Joffrey to toss aside his betrothal to Sansa and to marry Lady Margaery instead.

Where We’ll See Her Again: Cersei might think that she has the right stuff to rule the Seven Kingdoms, but her daddy Tywin doesn’t quite agree. Not only is he shocked at how poorly Joffrey turned out, but he plans to find Cersei a new husband… Something neither Cersei nor Jaime will be terribly happy about. And, come to think of it, any prospective husbands (in the long term). 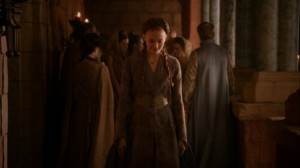 Where We Saw Her Last: Expressing happiness at the end of her betrothal to King Joffrey, then fear upon realizing that he still has power over her. Littlefinger promised to help her return home.

Where We’ll See Her Again: While Sansa’s not going to be terribly happy for the aforementioned reasons (Joffrey, obviously), she’s also going to make some interesting new allies — including, interestingly enough, Margaery Tyrell. She also receives help from someone we met once in season 2 but probably never expected to see again, and gains two prospective husbands — one we already know and one we don’t. 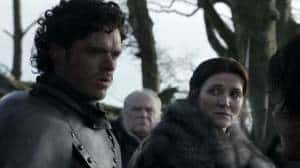 Where We Saw Them Last: Robb was sealing his marriage vows to Talisa Maegyr, despite his mother’s warnings that breaking his oaths would cause serious repercussions.

Where We’ll See Them Again: We’ll finally get to meet Catelyn’s side of the family in season 3, including her brother Edmure, her dying father Hoster, and several others (all of whom are really cool). But Robb’s mistake isn’t quite behind him, and he still has to make amends to the Frey family for reneging on his betrothal to one of the Frey girls. It also looks like Robb will attend another wedding by season’s end. 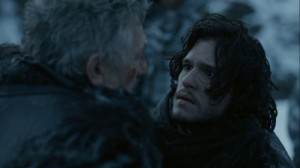 Where We Saw Him Last: On his way to meet King Beyond the Wall Mance Rayder after killing Quorin Halfhand as part of an undercover mission to infiltrate the wildlings.

Where We’ll See Him Again: Jon meets Mance Rayder and is surprised by what he finds. As his sting mission with the wildlings continues, Jon tries to plot a way to return to the Night’s Watch. But will they want him back, since only he and Quorin were aware of the mission? Oh, and if you think that the sexual tension between Jon and Ygritte won’t be revisited, well… You know nothing. 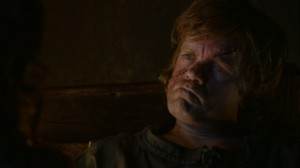 Where We Saw Him Last: Recovering from the attempt on his life that left him with a disfiguring scar and deciding to remain in King’s Landing, despite no longer being Hand of the King.

Where We’ll See Him Again: Tyrion finds himself demoted in the wake of his father’s return, and is rightfully angry about it. Tyrion is frustrated by being made a political puppet by his father as well — especially when he is made to take a new bride (that isn’t his lover/prostitute Shae). 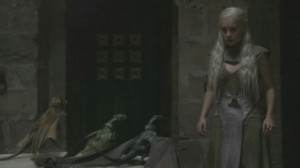 Where We Saw Her Last: Sacking the house of the scheming Xaro Xhoan Daxos, locking him in his empty safe and taking all of his valuables — enough to buy a small ship, according to Ser Jorah.

Where We’ll See Her Again: Daenerys continues to move through the East, leaving the now-unfriendly Qarth. While she has some gold from Xaro’s house, she might find that there are other things worthy of purchase than a small ship. Throughout the season, Daenerys will become, in essence, the Game of Thrones version of Abraham Lincoln.

Game of Thrones will return for its third season in April 2013.