Home
Game of Thrones: Who Will Be the New Face of the Series? 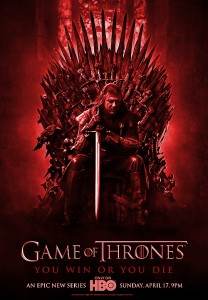 This article contains mild spoilers for season two of Game of Thrones. It’s really nothing that won’t be in casting news later on, but be warned.

There’s no denying it; at least for the first season of the HBO series, Ned Stark (Sean Bean) was the star of Game of Thrones. The show’s promotional campaign featured the maybe-iconic image of Ned sitting on the iron throne, his eyes downcast and his face in shadow. He was the only character to really relate to the series for unfamiliar viewers.

But now his face (and head) have been detached from the rest of his body, thanks to the new King Joffrey (Jack Gleeson)’s capricious verdict. He died in the final moments of Sunday’s episode “Baelor,” and the series will certainly never be the same (check back tomorrow for why I think Ned’s death is good for the storyline). Perhaps what will change the most is the promotional campaign for the second season (based on Martin’s second novel in the saga, A Clash of Kings), which was announced shortly after the first episode aired. Who will be the campaign’s focal point?

It was a tough decision, for a while, over who I should choose. I kept coming back to Tyrion Lannister, played masterfully this season by Peter Dinklage. However, the Imp’s powers of wit aren’t quite poster fodder (unless they ran a campaign similar to Curb Your Enthusiasm). Dinklage will get his accolades elsewhere, through a possible Emmy nomination and even possibly a win.

But, when you think about it, there’s only one real choice in my mind of who can be the poster child, and she hasn’t even appeared on screen yet. 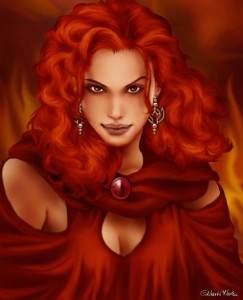 Her name is Lady Melisandre of Asshai, and she’s going to be a major player in season two. Melisandre is a Red Priestess to the Lord of Light, a new deity that is only just becoming popular in Westeros. She’s an advisor to Stannis Baratheon, who has declared himself the rightful king, and she resorts to nefarious means in her attempts to see Stannis crowned. Melisandre (an artist’s interpretation of whom is pictured right) is a beautiful red-haired woman who dresses in red almost exclusively. She’s dangerous, very dangerous, and she’s everything a poster campaign needs.

If the producers would cast a big-name actress in the part, she would be the perfect face of a campaign. The posters would center on a beautiful but deadly looking actress who audiences are familiar with. Isn’t that really all a campaign could need? And the color scheme definitely works; subconsciously, red sells. I can envision the ad campaign already, and I have to say, it looks pretty awesome.

Will HBO go with this idea? I certainly hope so. If they don’t, though, I’m certainly interested in seeing exactly who they choose to front their new campaign.

Game of Thrones will return with season two in spring 2012.

Also check out: What to Expect In Game of Thrones Season 2