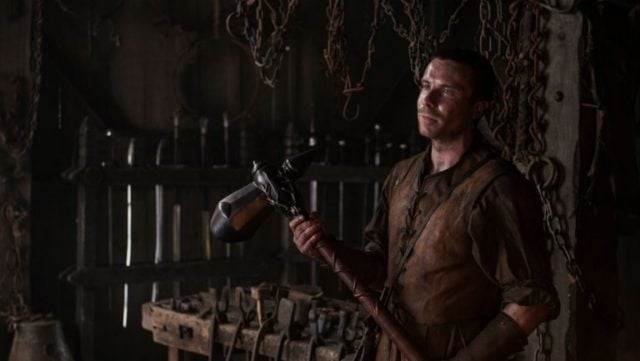 So the big rumor, at least one of them, in Game of Thrones is that Gendry was thrown back into the mix so that his story arc could finally end as he gets taken down by the White Walkers. Really? A lot of fans are calling this out for the bit of gossip that it most likely is. After all you don’t just take a character out of the story for three seasons then bring him back to kill him off, do you? That would seem like one of the biggest and laziest cheats in TV history, and there have been some truly despicable moves throughout the years. If they were going to bring Gendry back just to kill him off they might as well have done it on the beach before they got away. Otherwise, he needs to survive a bit longer.

Here’s a few reasons why we should expect to see Gendry past the next episode.

I’ll say it once and only once because it speaks volumes. He’s become one of the best blacksmiths in all of Westeros and knows his way around a forge. When it comes to handling the White Walkers it’s been seen that only Valyrian steel and dragonglass can possibly hurt them. Gendry knows how to craft weapons, and with enough Valyrian steel and dragonglass he could help to turn the tide against the undead and possibly save Westeros. So despite the pictures that have been seen of the Hound wielding Gendry’s impressive warhammer, it is still not likely that the young man has fallen just yet. Keep in mind that they are attempting to secure a wight in order to show it to both Daenerys and Cersei, so he could be helping to bring one of them down with another in the group in those tumultuous moments.

The line of Robert Baratheon is probably a lot more widespread and longer than many would care to think. He was after all a womanizer and likely didn’t really pay much attention to how many women he impregnated. Gendry could be just one of many children that could lay rightful claim to the throne by dint of being Robert’s bloodline. Renly is dead, Stannis is dead, and Robert’s been dead since the first season. The only issue would be attempting to claim the throne from a power-hungry Cersei or a dragon-riding Daenerys. Neither option seems that great. But the great thing is that Gendry doesn’t seem to have any illusions about gaining the throne. If anything he could become the king’s Hand to the King in the North. Jon Snow would no doubt be glad to have him.

So for all of you fans that are worried over whether Gendry’s going to bite the dust, stop chewing on your fingernails and get a grip. If he does go then it means that the creators wanted to give him one last hurrah. If he survives, like a lot of us believe he will, then he should be moving on to bigger and better things.