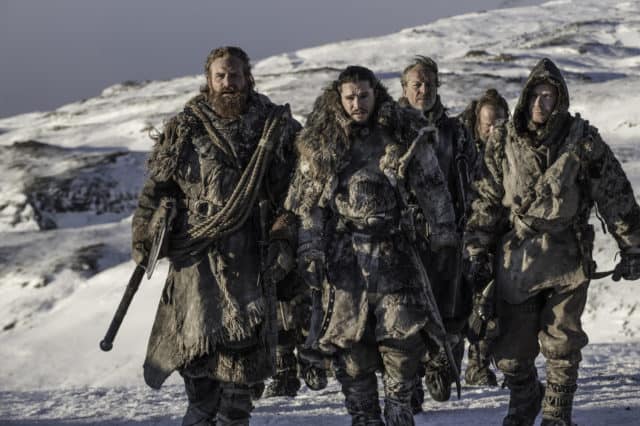 This is one of those Game of ThronesÂ episodes that people will be talking about for decades. The Red Wedding. The Purple Wedding. Hardhome. Battle of the Bastards, and now “Beyond the Wall”. All of these episodes are still constant water cooler subjects for the majority of the TV-viewing public, and it’s easy to see why this one will be forever etched in the history books.

“Beyond the Wall” started out like a spin-off show that I would totally watch. The “motley crew” of Jon Snow, Gendry, Tormund Giantsbane, Ser Jorah Mormont, Beric Dondarrion and The Hound ventured north to try and capture a White Walker to prove to both Daenerys and Cersei that there is a bigger threat facing them than each other. Just a show about the men listed here fighting the “walking dead” and traveling together could make an entire show that I would watch, but it worked so much better in the larger picture.

Jon Snow has finally yielded his throne to Daenerys Targaryen, and with good reason. She sacrificed a lot to seek out Jon, Jorah, and a few strangers in a strange land. Of course, we all thought that when these two met, that was the pinnacle of “A Song of Ice and Fire”. But I’m starting to figure out thatÂ Game of ThronesÂ is taking that much more literally than I ever could have imagined. The mother of dragons and bastard of the north meeting was obviously just the beginning, as we have since seen both ice and fire in quite literal manifestations. Of course, the most literal is yet to come. (SPOILER) There is a White Walker Dragon coming our way. You have outdone yourself,Â Game of Thrones.Â

I have a lot of thoughts and feelings about what happened in this episode, but nothing compared to the feelings I had about losing one of the dragons. Though my child was sleeping next door, when the Night King lifted his spear I did all but scream “No no no no no” and when the dragon fell I threw myself on the ground in disappointment. Okay so it wasn’t that dramatic but the emotional response was clearly massive. You know it’s big when Jon and Daenerys holding hands is the second biggest moment for fans of the show.

I only have a few concerns going forward. One is that Arya and Sansa are at odds and they’re both terrifying in their own way. I would hate for the Stark family to do something to tear itself apart, especially after all the clamoring the fans have done to get them back together. Ideal ending: Arya kills Littlefinger instead. I also have concerns that Daenerys will endure tragedy if she fails to listen to Tyrion in the future. Of course, it’s much more likely that she will regret not having done so and losing one of her dragons, so I’m less worried about that.

There have been some greatÂ Game of ThronesÂ episodes in the history of the show, but I’m certain this will stand the test of time as one of the all-time greats. “Beyond the Wall” was a masterful, exciting episode and I’m so excited for next week’s season finale. The hard part comes afterward, when we have to wait.

Game of Thrones Season 7 Episode 6 Review: "Beyond the Wall"