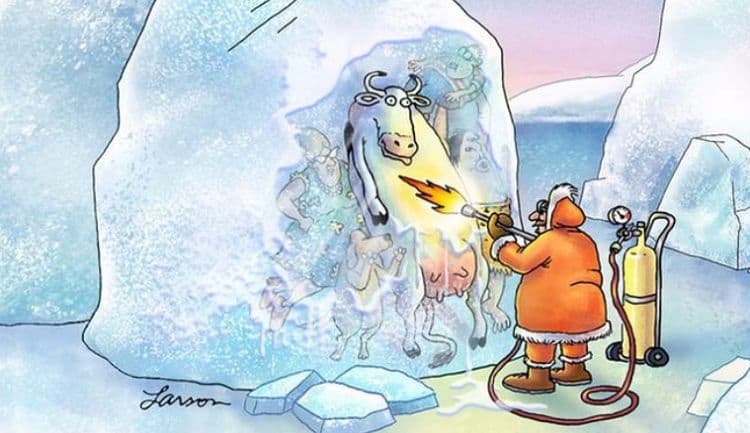 It’s difficult to believe that it’s been 25 years since Gary Larson graced us with his artwork and his strange sense of humor, isn’t it? Well believe this, he’s on his way back to entertain us again since after finding out about digital artwork he’s been invigorated to produce new content and new images for us to enjoy and laugh at, much as we did when he was still hard at work. Unfortunately, as it sounds in the past the supposedly introverted Larson was feeling the pressure of deadlines and felt the need to simply go away for a while. To be fair he didn’t exactly need the money or notoriety any longer since The Far Side has been such a big part of pop culture in the last few decades that it’s been possible to recycle old material and continue to laugh at it. In fact, in some cases people have been known to take inspiration from Larson’s work in a way, using his style of comedy to keep themselves moving and make sense of the day to day mess that a lot of us call life. Right now, as many folks would agree, we definitely need some humor and what’s great is that Larson has found out about digital artwork and how to make it work for him. What that essentially means is that he’ll be doing things on his own terms and cranking out more comics for people to enjoy without having to worry too much about deadlines, which can be insanely stressful now and then.

A lot of people can probably recall having the day by day calendars featuring a different Far Side cartoon each day, a pleasant reminder to smile, and possibly realize the importance of laughter now and then. Plus, Larson’s sense of humor has usually been varied enough to make some people cringe and others to laugh aloud from the ironic and fairly ludicrous images he depicted. It’s difficult to realize how long it’s been since he created anything new largely due to the fact that his works have still been in circulation for some time, finding their way into various locations where people still find them enjoyable and at times even capable of explaining away one aspect of life or another. Many people have caught that fact since Larson has never had any trouble depicting very real and honest situations in a comical and very outlandish sort of way. In other words, despite being cartoons, his panels have almost always had some sort of basis in the real world, but have taken such moments and created something that people find pleasant and memorable at the same time. In this manner, he’s become something of a pop culture icon, as many people have come to know his name over the years and have fully enjoyed his work.

A lot of us should be able to remember at least a few of his panels if not more, since there were plenty of us that likely had entire books of his work and laughed or at least chuckled at each page, waiting with anticipation as we flipped through each page, hoping to laugh just as hard at each one. Cartoonists have a way of making us laugh even when we’re having a bad day since their comical strips tend to elicit at least a snort of laughter, even it’s in response to the ridiculous nature that a lot of them are born from. Much like a lot of cartoonists, there were jokes that Larson put into his strips that sometimes went over the heads of those reading, if only because their minds don’t work in that manner or because it was something that only a select number of people might fully understand. A good deal of his humor over the years has been easy to grasp and has been for just about anyone that can fully understand it and therefore enjoy it immensely. With some cartoonists, the irony of their selected subject matter can sometimes drown out the funny aspects of it, but with Larson, there was usually the expectation that one would be laughing on a few seconds after reading the captions or taking a good look at the comic.

The idea that he’s going to come back and give the fans even more of what he once delivered on a regular basis is exciting since it will be interesting to see if his sense of humor has changed at all in the years since he retired. It’s not too surprising to think that his retirement wasn’t bound to last for good, as those that love what they do often find that they can’t be away from it forever, though it was likely a nice break for Larson as it allowed him to live without deadlines for a while.