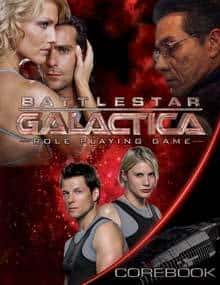 It’s time for another look into The Geek Closet. After our eventful playtest of the Dexter board game two weeks ago, my friends and I started looking up other TV show-inspired games. (Anyone realize that there was an Alf board game?) That led us to Margaret Weis Productions’ 2007 Battlestar Galactica RPG.

Personally, I couldn’t wait to dig into this one. I’ve been a longtime RPG player since the days of second-edition Advanced Dungeons & Dragons, and I’m just starting to get into Battlestar Galactica (thanks to being a fan of Jamie Bamber’s work on Law & Order: UK). A Battlestar RPG sounded like my idea of a good time. Yet as we sat down to play Thursday night, I found out quickly that I was the expert on the topic – no one else in my social circle is a fan of the show. Or is really even familiar with it. Oops.

Thankfully, you don’t have to be a BSG fan to be able to play the roleplaying game. The introductory section provides plenty of background information, and if you give the corebook a fair read-through you’ll pick up other things along the way. In that sense, as long as you and your fellow players have a decent attention span, you’ll be able to fit right in. Die-hard fans of the show have pointed out that since this book was released in 2007, it doesn’t cover content from the entire series; don’t expect an expansion. My sources at MWP have told me that they discontinued this property awhile back.

With a roleplaying game, a good amount of time is taken up simply by creating your characters, which in some systems can be an arduous process of rolling dice, looking for traits, and figuring out what the heck you’re trying to do. Simply because of time constraints, we used the sheets for canon characters provided in the corebook. (Of course, I had to play Lee Adama, which resulted in a horrible impression for which I owe Jamie Bamber a profuse apology.) I did go back and peruse the guidelines for character creation, and anyone who’s played a game of AD&D should have no problem pulling together a character in this game. There is a fair amount of math, of course, but if you’re averse to doing math, then you probably don’t play a lot of RPGs to begin with.

Gameplay was fairly standard for anyone who’s played one of these types of games before; for my group, where we had all been pretty involved RPG’ers in our youth but fallen off as we’ve gotten older, things were a bit rusty at the start but we found our footing. The Battlestar Galactica RPG uses the Cortex system that a lot of MWP games use. (To me, that sounds French because I don’t see much difference between it and the games I played in my youth, but I mention it in case it means something to you.)

The truth is that any RPG is only as good as the effort you’re willing to put into it. If you’re not willing to sit down and figure out traits and attributes to make up a character, to sit around and brainstorm the plot for a session, then you’re not going to get much out of any game. In the two hours we played, we didn’t get that far, but we enjoyed the game because we were willing to say “damn the fact that we don’t know the ‘verse, let’s read the book and throw something together and see what sticks.”

If you’re willing to invest the time and effort, though, the BSG RPG does give you all the tools to immerse yourself in the universe of the show and run with whatever ideas you can come up with. You have the chapters on history, equipment and vehicles, and the usual reference indices at the back of the book. Of course they don’t include everything, but you have plenty of options to choose from that will keep even the most choosy player entertained. This, I can vouch for personally, because one of my players is a guy who once embarked upon a profanity-laden tirade because Star Trek: Starship Creator wouldn’t let him put a cloaking device on his starship. He had no such problems when it came to picking out attributes during the Battlestar Galactica game.

One glaring flaw that stood out to me is that this corebook is ridden with typographical errors, despite the presence of a proofreader. That does take some of the shine off the game (like when there’s an obvious “knew” where it should be “new” or “Aplha” where it should be “Alpha” in a section about the alphabet, for crying out loud), especially if you’re paying the $45 retail price for it. As I was reading through in preparation for our session, I found myself distracted by playing “count the typos.” They are numerous and obvious, at least to my eye, and they make the finished product look a little sloppy.

That said, I enjoyed playing Battlestar Galactica, and I’m sure I’ll enjoy it even more once I get into the series and get a firmer understanding of the show itself. Yet the RPG remained accessible to the newest of newbies and provided a fun escape for us all (even when suffering through my horrible impression). Although some fans might be unhappy with it being an incomplete work, I’m content with what we do get, and I’d recommend it to fans of the show and fans of roleplaying games alike. Just be sure that you’re willing to dive in and work with all the game has to offer.

You can order Battlestar Galactica: The Roleplaying Game directly from Margaret Weis Productions or through DriveThruRPG.com. Until next time, I’ll be over here cleaning out The Geek Closet.