Home
Dexter
The Geek Closet Uncovers “Dexter: The Board Game” 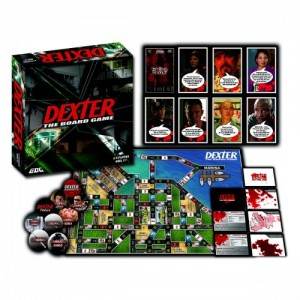 Step inside The Geek Closet, where I’ll be uncovering the best and most unique in TV merchandise. The first item I’m pulling off the shelves is GDC’s Dexter: The Board Game, which allows you to step into the role of America’s favorite serial killer.

Licensed board games like this are either some of the most fun I’ve ever had or utterly maddening to play. There are great ones like Star Trek: The Next Generation – A Klingon Encounter (1993), that my friends and I played on countless weekends. Then there are the horrible ones, like the 24 DVD Board Game (2006), which drove us insane with a task none of us could manage to get past…until we found out that it was a defect in the DVD portion that almost no one could beat. As a result, I got incredibly excited when I heard there was a Dexter game, while hoping it wouldn’t induce a migraine.

GDC knows it’s dealing with an adult property, so this is a 2-4 player game oriented toward those 17 and up. (Anyone who knows anything about Dexter should have figured out that this isn’t a children’s game anyway.) There won’t be any arguing over who gets to take over for Michael C. Hall; everyone assumes the role of Dexter, pursuing his next victim. The winner is the first one to complete the kill and dispose of the evidence. Fans of Deb and the other supporting characters will find them all represented on the Calling Dexter gameplay cards; I was thrilled to discover that GDC had included my favorite, Desmond Harrington as resident antagonist Joey Quinn. Drawing the cards takes the place of having the characters interact with Dexter. While I miss the chance to try and do my best Deb Morgan impression, it’s great that the whole cast is represented, helping to plunge you into the Dexter universe.

Gameplay is just like the general premise of the TV series: players must maintain their day job as blood spatter analyst, while also collecting the tools they need to complete their kill (complete with handy mini garbage bag to store them in!). Once they’ve tracked down and dispatched their victim, then they must make it to the marina and dispose of the evidence. Simple enough, and faithful to the TV series.

On to the playtest… 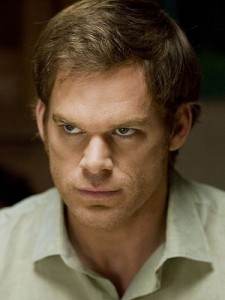 Of course, a proper review of a board game means you have to playtest it. I rounded up a few friends and gave Dexter: The Board Game a late-night whirl (which only makes it more creepy). The good news is that the game was accessible even to the friend who had never seen the show before. Those of you worried about spoilers will likewise find nothing to worry about, at least not from the one time I played through.

The sticking point is that this game does take awhile to learn. With ten different types of spaces on the game board, my friends and I routinely had to consult the rules to figure out what we had to do after landing on certain ones. This got easier as the game went on, but it might take awhile for those of you who don’t play board games this involving. Another thing to note is that you do have to set up and control suspect and tool tokens, which is a wee bit tedious but nowhere near the amount of effort that it took to play 1994’s X-Men: Under Siege.

That said, once you get everything in place and know all the ropes, Dexter: The Board Game is really fun to play, especially if you enjoy a little friendly competition. In addition to trying to find everything that you need and get to the right locations (which may take awhile, as there are 24 different suspect tokens and eight locations), you’ll also be spending your time stealing tokens from your friends, or swiping ones off the board that they might need. This resulted in a lot of idle threats and amused laughter around our game board. In board games, there’s nothing more amusing than laughing at someone else’s frustration, especially if you caused it. Dexter: The Board Game gives you plenty of opportunity to mess with your friends.

If there’s one annoying aspect of this game, it’s how easy it is to lose toward the conclusion. If a player lands on the same space as a player en route to the marina, the latter is automatically “discovered” and eliminated. In other words, you just spent however long getting so close to winning the game, and you’ve been knocked out in one move. It’s a rule bound to provoke frustration-induced swearing. Since it’s completely up to a roll of the die, hopefully it won’t be a factor in too many games.

Dexter: The Board Game has plenty of replayability as well. With 24 different suspects and 27 different tools, you never know who and what you’ll be tasked to find. Rather than everyone going after the same checklist of three or four things, there are plenty of combinations that will keep you guessing. I’m already looking forward to spending a few Sunday nights before the TV series trying to one-up my friends to see who’s the more efficient serial killer. (Never mind what that says about my friends.) Fans of the show will have fun stepping into the role of their favorite antihero, and fans of games like Clue or The Omega Virus will just enjoy the mayhem it causes. This one’s definitely recommended.

You can purchase Dexter: The Board Game directly through GDC or Showtime, or through major retailers like Walmart, Amazon and Costco. Prices vary depending on retailer. Until next time, I’ll be over here cleaning out The Geek Closet.