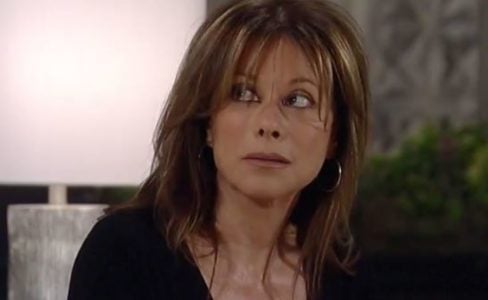 General Hospital fans want to know what is going on with Alexis and Carly? They are both in a situation that puts them in a certain place in their own lives, and they might bond through that. We do hear they are going to find a little common ground in their own lives right now, and we can’t help but think it has something to do with Julian and Sonny. They both have secrets. They are both men who do things a little off color and not entirely along the lines of legal.

They are both men who do what they want and they don’t worry about who is hurt until it’s too late. Both of them have hurt their families in a way they can’t just get over. And both of them have tried to get their wives back. They both have issues with their kids, and they both have to work hard to make sure people forgive them.

Is that what these two women will bond over? We don’t know, especially since we have such a hard time finding Carly willing to bond with anyone who gave birth to someone who shot her husband. She might not know yet, but she will know before much longer. She already suspects she knows that something is going on with Sam that no one will tell her about. Will she find a reason to make sure Alexis pays for her daughter’s actions, or will they know right away it has more to do with Julian than Sam?