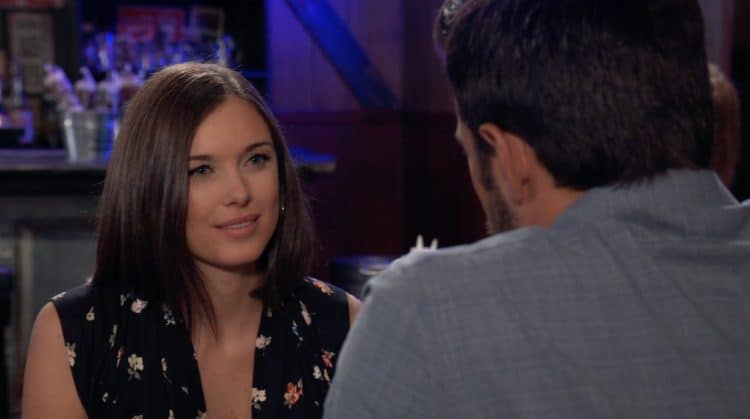 General Hospital fans know that there cannot be happy couples everywhere. They have to make things fall apart from time to time while we watch it happen. There’s very little we can do to make things happen for the best, but we don’t want to. This is why so many people are not working out, and there is nothing wrong with that. We know that not every couple who ends up together can end up with the best chemistry in the world. They cannot all be happy and healthy and loving and wonderful and they cannot all work out. But, some couples simply don’t seem to work from the start. When you simply have no chemistry, you have no chemistry. There is nothing we can do about that, but we can sit here and tell you that there are some couples with nothing to offer in terms of heat and chemistry.

When they were together, it was not good. First and foremost, it was hard for us to accept this given the fact that she was terrible and awful. But, it made things even harder for us that they didn’t have an ounce of chemistry. You see, we think that when a couple can have some chemistry, we can overlook the bad things one of them did. Take couples like Sonny and Carly. They have so much chemistry that it’s easy for us to forget that he’s a bad guy who does kill people and make horrible choices. But that’s because they have chemistry and we love to see them together. That is not how we feel — at all — about Michael and Nelle. But, that was also wonderful acting on her part, we think. She’s made a lovely villain. She’s truly awful in this role, but in a way that is nothing short of totally brilliant. She is everything we love and so much more, and we cannot get enough of that at the moment.

These two. Well, they are no longer together, and that is clearly for the best. We think that they liked one another at some point, but their chemistry was just non-existent. You see, we think she’s got all the feelings for Drew, and her life was there him to take control of when he felt that he was ready or willing to do that. She would have, and correct us if we are wrong, dropped Julian like he was hot if she thought for a second that Drew would give her the time of day. Meanwhile, we also know that Julian has the same feelings for Alexis. He will never feel for anyone else the way that he feels about her, and that’s all that there is to it. We know that things will never change for them, but that’s all that we hope for sometimes. Just a second that they can reunite and make things work. Unfortunately, for Julian and Kim, they will never work. We don’t think they care to try, but they will really never work.

We know this is hard to hear, but their marriage is a nice one if you take into consideration that they are a happy couple who likes one another a lot, has a lot of respect for one another, and they do make a good team. But, they have no passion. They remind us of those good friends who make a pact to get married to one another one day if things just don’t work out with their lives. Like “If we are both still single when we are 40, we will just marry one another and take the gifts and the cash and take an epic honeymoon and just live like that,” and that’s what happened to them. Of course, he’s a clearly troubled young man who has a lot he needs to figure out, but she’s someone who has so much to offer. We’ve seen her with the love of her life, and it’s almost painful to watch her with anyone who isn’t Lucky. It’s hard on us to take that and accept it, but these two have no chemistry with one another at all.