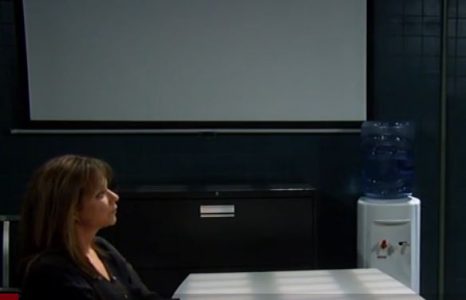 Alexis is blindsided and furious on a brand new General Hospital. The source of her anger is Julian. She is blown away that he is willing to let her take the fall for his crimes, for his horrible lifestyle and for the way that he deems it possible to be free. She is not happy that she’s been arrested and charged with a crime she did not commit, and she’s not even remotely happy to know that he’s just standing around basking in the love and attention of another woman while she goes down for his crimes. If she’s freed, he might want to watch his back because she is a woman who has far surpassed the point of no return as far as her anger goes.

Liz is just minding her own business when she hears something that might be incriminating against someone. We don’t know who it might incriminate or what might happen, but we do know that whatever is going on in her life right now might make it possible for her to take someone down and help someone else. Who might it be? We are not entirely certain who she might be able to help and who it is that she might be incriminating, but we are certain that she has found the answer to Alexis’ problem. Michael is finally able to bring some positive news to someone. He has something good to share with Sonny and Carly, and it is about time. These two have had enough to deal with recently, and it’s about time that they are given a second chance to make things right and to get to the bottom of things in their lives.

Julian is in the midst of feeling pretty good about himself, but we think that he might not get to hold onto that feeling much longer. It seems to us that he might have a little something to worry about now that Alexis is so mad. He might want to enjoy this feeling while he can, because we don’t think it will last much longer for him in his current state.