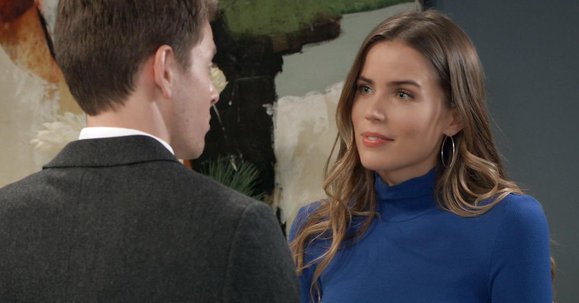 General Hospital fans were super surprised and more than a little bit happy to find out that Spinelli was back in town and ready for some action. He’s the kind of guy who does make things a bit more interesting than they are in his own weird way, but to see him reunite with Maxie was fun, too. It brought back so many old memories we’ve been holding on to for so long, though we do think that this is not something that will go much further. At least, we hope it’s not. They have some things to attend to, and we’d like to see them make that happen. For now, though, this is what we are getting. He is back, things are changing, and we hope that he is back for a long time. There’s a lot he needs to do and a lot he can do to help people out and make things work out better for everyone.

Alexis is not in a good place right now. She’s learned the entire story, and it’s not what she thought. So many things here were not entirely what she expected them to be, and that makes a big change in her life. She’s not going to sit back and allow this to overtake her, but she’s also not going to allow anyone else to get in her way now that she knows what’s up. She might have more than a few questions about things, and for certain people, going into this week, though. They might want to watch out. She is, after all, an attorney. This means can take you down, mess you up, and make you wish you didn’t have her in front of her face like it’s her job. And, well, it is kind of her job.

This could be good.

"I am about to have the sweetest revenge." #GH pic.twitter.com/sseIsev8GJ

Tracy and Ned have to sit down and have a conversation. There is a lot happening right now in both of their lives, but she’s got to remind him of a few things. The most important thing she is planning on sharing with him is the fact that he has to get over what is going on in his life and work on figuring out what is good in his life. He’s got to remember the important things, and she’s just not sure that’s what he is doing. He’s not in a place where he will get that point across in his own mind if he’s not open to it. But, that’s where they are right now. They are not open to it. It’s not working for them, and they don’t know how to fix things.

However, we also know that Laura is going to interrupt something big. We don’t know what, of course, but we think that it might have something to do with the son she didn’t know was home and the many issues she’s dealing with right now in finding him there while she thought he was gone all this time. Not just gone, though. She knew he wasn’t out and about and just not returning her calls. She thought him dead. She might have hoped he was alive after he faked his death once before, but now her hurt and her shock are just too much for her. Is this what the interruption is all about? Or is there more to this?