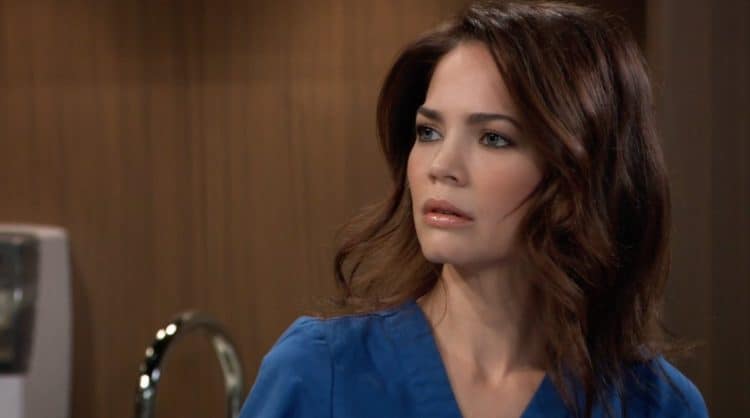 General Hospital fans know that Spring is in the air. It’s going to be here in just over a week, and that’s exciting news. That means everyone outside of Florida will finally have to suffer through terrible allergies thanks to all the pollen alongside those of us who have been living through a terrible spring and allergy season since before Christmas, and that’s called sharing and caring. In all seriousness, though, we did a prediction back in December as winter began that a few things might happen in Port Charles during the winter season — and we were so right about so many of them. That means it is time for us to tell you what we think might happen now that Spring is in the air. Do you agree with our predictions for the upcoming season?

Nelle Will Get Out of Jail

Nelle is nothing if not an accomplished and wonderful liar. She’s someone who can make anyone believe anything she says, and she’s skilled. However, she’s going to use this to her advantage to get out of jail. She was so close to being free until she was arrested and taken back for what went down with the baby. But, she’s good at lying, so she is going to use that. We already know that she is going to tell the police she did not give her baby away but that the baby was stolen from her following the car accident she and Michael were in, and she thought the baby she woke up with was her own. She’s not going to let this go, but she does have to come up with a beautiful backstory to go along with it, and that’s going to be the hard part for her. She also has most of the city working against her to keep her in there, and that will pose a problem for her.

Carly and Nelle: Round Two

This is going to be twice as bad as it was the first time, and it was so bad the first time. She’s not going to get away with lying about sleeping with Sonny again, and she’s definitely not going to sleep with Michael and get pregnant to make Carly horrified again, but she will take her on once again. This time, though, Carly has her entire family and half of Port Charles on her side, and they will never think anyone Nelle says about her to them is true ever again. But, she will fight this woman to the death to keep her away from her family and her son and his son. She will never let her fight for custody and win, and we would not put it past Carly to get her son and the baby out of town and lie about where they are if there is even a chance that it might look like Nelle gets some custody or visitation with the baby. She’s not going to lose this time, and we do believe she’s got this on lockdown. She’s going to win, and we are down for that.

We might not be as sure about this one as we are about a few other things, we be don’t see that Liz and Franco are going to continue to make their marriage work. They have been through a lot that is going to cause them some more issues in the future — we still think there will come a day when Kim shows up with a baby in hand and she’s not sure if it belongs to him or Julian, and that will be a problem in his marriage. But, we also think that with how close Liz is to Nik, things will become a problem. We also think that Ava will cause some problems here being that she and Nikolas are married and need to stay that way, so there is a lot that might go down here. Either way, their marriage will not last. And, we think that it’s closer to being over than we all think. We might not be right about the spring, but they won’t make it to fall together — that’s something we are almost positive of.