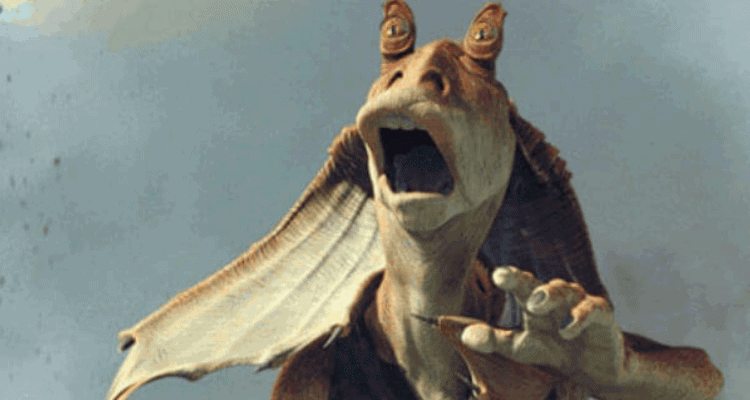 Excuse me while I laugh for a moment, the hysterical nature of the facts that Sandy Schaefer from ScreenRant has laid bare about a certain character being the favorite of creator George Lucas is simply too rich to deny at this time. Jar Jar Binks, one of the most hated characters to ever be featured in the Star Wars franchise, even more so than the most vile Sith to ever grace the pages of a comic or novel, is actually the favorite character of the franchise’s creator. That must feel like a kick in the head for a lot of Star Wars fans, especially the die hard bunch that tend to think they know absolutely everything when it comes to the franchise. It would seem that this little tidbit didn’t register for a while and it might actually make a few of them short-circuit upon finding it out.

As an author and someone that has come to know what it means to care about your characters one thing is very evident: what the fans think doesn’t always matter. It’s very true that anyone that creates something needs the fans to make it worth their while when it comes to making it popular. But one thing that fans forget is this: they didn’t have anything to do with the creation. So many Star Wars fans over the years have seemed to think that their fandom is an excuse to treat their own opinions as though they’re weighted in gold that the fan base has been split a great many times over what it considered to be ‘good’ and ‘bad’ for the franchise. The truth of the matter is that Lucas and whoever has been at the helm since has their own vision and while they might take into account what people would love to see, they’re still going to do their own thing.

Jar Jar was actually seen as a racist character back when The Phantom Menace first came out, as Andrew Gumbel of the Independent and many others went on to rant. Racist, really? Because none of the other aliens would seen as racist, would they? From the Trandoshan’s to the Wookie’s to any other alien race that’s been shown in Star Wars throughout the years it would seem that the franchise has taken a very big worldview when it comes to the many different species. Not to mention Oola, the Twi’lek dancing girl (below) who was, in actuality, a SLAVE. Yet no one seemed to think twice about that, nor did they think about how so many Twi’leks throughout the history of the franchise, throughout the books and the comics, were sold into slavery as dancers and even pleasure slaves. For crying out loud, Anakin Skywalker and his mother were slaves and people didn’t even bat an eye.

This really proves that people see what they want to see and that the right or wrong of a movie is largely based on perception. Being a very big Star Wars fan myself it’s hard to look at anyone that loves the franchise and tell them off when they decide to run their mouth about the franchise. But that’s their right as a fan and as a person, they can say what they want and have their own opinions concerning the movies and the franchise itself. In terms of Jar Jar Binks though, he and the Gungans were more than just the comedic relief since if you’ll remember he was probably the only one among them that was somewhat funny since the others were very serious throughout the movie and didn’t share in his frivolity. Yet a lot of folks seemed to base the entire species on what Jar Jar did and didn’t think twice about it. If you can think back now, Jar Jar was actually kicked out of his home because he was too much of a klutz, and because he’d made too many mistakes that had caused far too much damage. Exile is tough, but it’s certainly better than execution, which would have likely been kind of dark.

But as you look at Jar Jar’s history now you might want to think about this: he didn’t exactly have a happy ending. Cosmic karma kind of caught up with Jar Jar since he, along with many other, pushed for Palpatine to become emperor, and as a result he had to live with that for the rest of his life. Jar Jar might not have been favorite of many people but he didn’t deserve to be reviled as he was for so long. The fact that he became George Lucas’ favorite character though, that’s worth laughing about since it no doubt would leave a lot of ‘dedicated’ Star Wars fans in a tizzy trying to figure out why. It’s a story folks, an epic and grand story to be sure, but still a story in which everyone has their part to play.