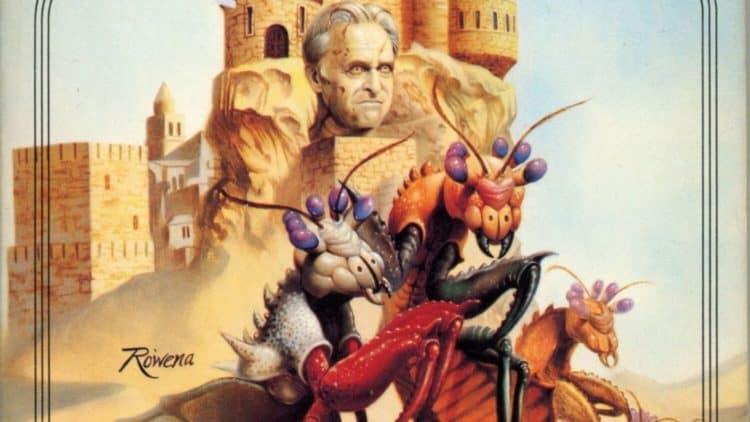 George R.R. Martin appears to be another name that is getting more and more attention following Game of Thrones, since Sandkings, a novella that he wrote decades ago, is now being made into a movie that will be featured on Netflix. If you’re wondering what in the heck a Sandking is, look no further than the picture above, since they’re insects that aren’t too unlike ants in their practice of taking over any space they happen to find themselves in, and they can definitely be violent. But the director for this project, Gore Verbinski, isn’t really giving away too much about the project at the moment, likely because he doesn’t want to spoil the surprise or because he’s still thinking of a direction to take the story in. The original tale was featured on an unknown planet that humans had been attempting to colonize, but as one can guess, insect-like creatures don’t always get along with humans, as both are bound and determined to spread their influence far and wide, and two factions that have a very different outlook on life are bound to war with one another, and those that are more numerous and less concerned about the welfare of their kind are bound to win. In fact, this story has already been adapted in an episode for The Outer Limits back in the 90s, starring Beau Bridges and Kim Coates.

What Verbinksi plans to do with it isn’t certain yet, but anything involving bugs is going to be different, that much is for sure, especially since any movie with bugs tends to get messy and even a little bit creepy from time to time given the vast difference between the way bugs and humans think. It’s likely that it will be a little bizarre since dealing with bugs as characters in a story tend to give a lot of people the idea that they’ll be brainless or follow a hive mind that makes them even more dangerous since such creatures don’t often possess much of an ego, meaning that they’ll do anything to protect the hive or nest, which includes giving up their own lives in service to the greater goal of perpetuating the species. If anyone’s ever watched a movie involving insects of any size and that live to protect the nest and help the species thrive they’ll know right away that Sandkings are, just by their description, bound to be nasty critters since the ability to let go of the self and give everything to the species is something that a lot of humans just don’t know how to do.

This is definitely outside of what anyone would have expected from Martin, but given that it was published so long ago it’s fair to say that he’s changed quite a bit over the years and his interests might have changed with him. It’s the hope of many authors that their tales will be read, enjoyed, and possibly picked up and made into something greater than what they already are, but after so long it’s funny to think that someone finally had the idea of bringing something like Sandkings to the small screen once again. Given the way that special effects have advanced over the years, it does feel as though this should be given a bit of an upgrade, but until we get to see what Gore is doing we just won’t know. What is easy to guess is that since it has to do with bugs it’s likely to creep some people out since it’s a natural reaction of many people to anything that crawls or doesn’t look appealing in the least. Some people like bugs and some folks can’t stand them, but it’s kind of fun to wonder what Martin thinks of them since he’s the guy that came up with the story, and sometimes it’s been stated that authors do write about what scares or unnerves us the most. That’s true for some folks, but it’s still curious to know what prompted this story from Martin and how he swung so wide when he switched over to Game of Thrones from this. A typical writer might go on to write about something they know about or a subject that interests them, but a lot of authors tend to write about something that keeps them in their wheelhouse, meaning that it allows them to stay in their comfort zone. That’s why wondering why Martin wrote this story is intriguing since the difference between this and his other stories is pretty big.

It’s a testament to how often authors do find it necessary to switch gears from one subject to another since if one thing isn’t working from a marketing standpoint or just isn’t interesting enough, then it’s time to move on to the next thing. Sometimes those old ideas look better with age.