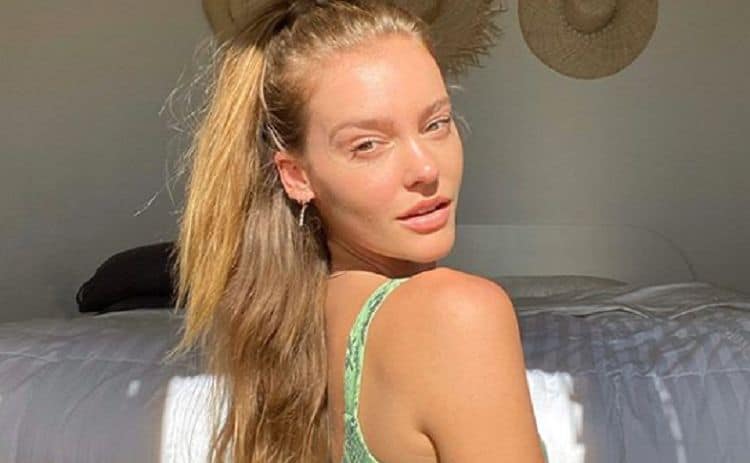 Georgia Gibbs is living the dream. At 24 years old, the Australian beauty is one of the most in-demand faces in modeling, as well as one of Sports Illustratedâ€™s most celebrated figures. Her Instagram account has a follower count most celebrities can only dream of, while her wholehearted celebration of body acceptance has made her as lauded for her opinions as she is for her appearance. Sheâ€™s not averse, however, to showing the truth behind the beauty, and has no hesitation is using social media to shed light on her struggles with isolation and loneliness. Learn more with these ten facts.

1. She didnâ€™t plan on becoming a model

She might be one of the fashion circuits most in-demand faces, but Gibbsâ€™ childhood dreams involved a very different type of career. â€œI didn’t actually plan to be a model,â€ she told GQ . â€œIt was just a wonderful opportunity I fell into and then I’ve been working hard ever since! I always planned to be a physiotherapist, I began my studies and then transferred to Business and journalism as I can study online and travel!â€

Gibbs might seem an Aussie girl through and through, but she was actually born on the other side of the world. The 24-year-old model was born in southern England but moved to Australia as a child. She was subsequently raised and educated in Perth, the city her family still live now.

3. Her breakthrough was on Australiaâ€™s Next Top Model

Although friends and family had always told her she should pursue modeling, Gibbs brushed off the comments until a friend entered her on the hit TV show, Australiaâ€™s Next Top Model. Although she failed to win the crown, the talent contest proved just the break Gibbs needed, kick-starting her career and paving the way to her becoming one of the most in-demand models of 2019.

4. Sheâ€™s an advocate for body positivity

Gibbs is seriously big on social media, and itâ€™s a position she takes seriously. Aware of the ever-growing nature of online bullying, and specifically the amount of body shaming that takes place on social media, sheâ€™s taken a stand to promote body positivity in all she does. While laudable, itâ€™s not something thatâ€™s been free of criticism. â€œI do get a lot of criticism of people saying, â€˜How can you be a body-positivity ambassador when youâ€™re a size two? When youâ€™re perfect? When youâ€™re a model? You donâ€™t have insecurities,â€™ she told Fox News. â€œAnd thatâ€™s just crazy because everyone has insecurities. No one is perfect.â€

5. Sheâ€™s the co-founder of AnyBody Co

In January, Gibbs was at the center of a social media storm after she was accused of photoshopping herself to look smaller against plus-sized model, Kate Wasley. As someone whoâ€™s championed body acceptance throughout her career, Gibbs understandably took exception to the accusations. Her response was to team up with Wasley to create AnyBody Co, an Instagram account with the praiseworthy aim of celebrating body differences. â€œ[Social media] is flooded every day with the â€˜ideal,â€™ â€˜flawlessâ€™ body,â€ Wasley explained to People. â€œGeorgia and I are so passionate about â€˜keeping it realâ€™ that we wanted to flood peopleâ€™s media feeds with a bit of diversity.â€

6. She thinks Sports Illustrated is a force for good

Not everyone is a fan of Sports Illustratedâ€™s particular brand of â€œfemale empowermentâ€, but Gibbs, who can credit a lot of her early success to the magazine, is a firm fan. â€œSI is celebrating beauty with no boundaries. Thereâ€™s no one form of beauty,â€ she told Fox News. â€œTheyâ€™re celebrating women as an individual person, not just an object. The female body has been an art form since the beginning of time. And I think SI has always celebrated that. I donâ€™t believe a woman should only be respected by just the way sheâ€™s dressed. I donâ€™t believe just wearing a swimsuit means youâ€™re doing something wrong.â€

She may seem to glow with the kind of outdoorsy beauty weâ€™d all like to emulate, but Gibbs isnâ€™t immune to the odd health scare. The model has been diagnosed with Irritable Bowel Syndrome (IBS), leaky gut, and candida overgrowth, conditions she tries to manage through a healthy diet that focuses on repairing and optimizing gut health.

She may seem to live an enviable lifestyle, but behind the smiles, Gibbs struggles with loneliness. Her career has meant she only gets to see her family in Perth a couple of times a year, while the constant traveling of the job makes forming lasting friendships hard. To try and support those who feel the same, Gibbs recently took to social media to share her struggles. â€œLoneliness I feel is still associated with stigma, a feeling we are ashamed of and donâ€™t really talk about, I often feel that stupid ego cringe when I openly admit it,â€ she posted. â€œDespite how grateful I am to live the life I do I just wanted to share with you, that if you scroll Instagram and see everyone sharing moments and laughs with each other and wonder if itâ€™s just you that feels lonely, I often feel lonely too. #DitchTheStigma.â€

9. She struggled with acne

Gibbs recently took to Instagram to share the story of her battle with acne. After a bout of illness led Gibbsâ€™ immune system to shut down, she developed a â€œfull-blown acneâ€ that left her too embarrassed to leave the house. â€œIt stopped me seeing my family and friends, it was so isolating,â€ she said. â€œI felt trapped in my own home.â€ â€œI had to cancel a lot of jobs and ended up missing out on three monthsâ€™ worth of work,â€ she continued. Fortunately, the skin condition proved temporary, and after taking a healing course of Chinese medicine, the model is now on the mend.

In March 2019, Gibbs launched Joy, a website and smartphone app that offers subscribers personalized nutrition plans and access to 30-minute workouts, along with mindfulness and yoga guides. â€œI want women to listen to their bodies and start putting themselves first,â€ Gibbs has said of the reason she started the website.