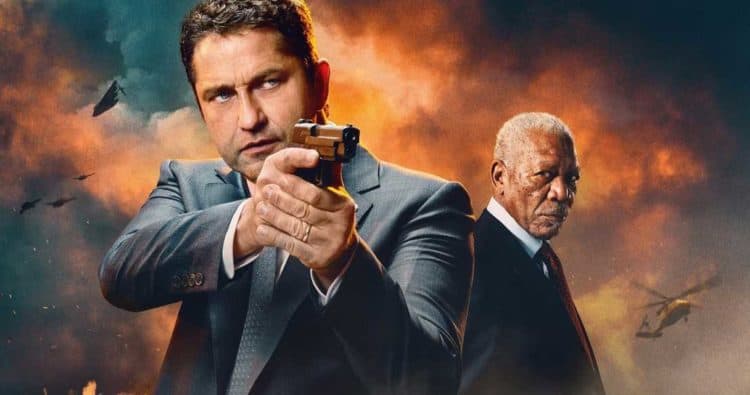 Do you get the feeling that too many things have ‘Fallen’ when it comes to Gerard Butler? Granted, being a Secret Service agent isn’t bound to be all drudgery and paperwork, but his movies seem to be taking things to a level that suggest the entire world is turning into a hi-tech version of the wild west where rules of engagement and warfare no longer apply. With these movies it simply feels that if a bad guy wants to do something bad then they’re going to do so without any warning and for…well, reasons. The point is, things just keep falling in this franchise and in a big way it’s becoming problematic since not only has Olympus, then London, now Angel fallen, but Radha Mitchell, the actress that played Mike’s wife in the first two movies, fell by the wayside as well so that Piper Perabo could come on and resume the role. Fred Topel of the CheatSheet has more to say on that matter. At this point the whole premise of the story seems to be falling apart since quite honestly the safety of the POTUS and the world at large seems kind of shaky if terrorists of this caliber are able to operate on the down low without anyone knowing any different. Plus, the idea of a domestic terrorist is already scary enough without adding in the idea of the Russians being behind anything that has to do with a terrorist attack.

It’s a big hope that the third movie is going to be the end of it since despite that Gerard Butler is a great action star, and he is without question, the level of crazy that these movies are going to is almost like watching the escalation of the Call of Duty games where things just continue to get worse and worse as they go along and the world just has to deal with it as it keeps happening and act as though things are okay. There’s almost no doubt that he’s going to be the one guy that can go in there and take care of matters since he’s just that awesome and he’s so highly-trained that trying to pit anyone against him is simply too hard to manage without bringing in the big guns that could possibly stomp him into the ground and make it necessary to give him a sidekick that can even the odds a bit. At this point Mike is a one-man army that has had a bit of assistance in the second and third movies but has always managed to get in and decimate the enemy at the very end since that’s just his role and his character. In a way it’s almost like Walker: Texas Ranger since really Mike isn’t ever in any serious danger, at least none that the audience can really believe since incapacitating him or killing him off would be way too extreme. When I say incapacitate however I do mean knocked out, put in a coma, or rendered inert in some way that doesn’t allow him to somehow snap out of it, free himself, and then kill the people that are trying to kill him. Corey Chichizola from CinemaBlend has more to say on this subject. That just doesn’t happen in these movies and it’s a bit unrealistic since the job of one man in the movies is usually the job of many individuals in real life. There are only a handful of people throughout history that could possibly be given the credit for decimating an entire force of enemies and even they had backup to rely on.

As of now the franchise is just getting too big and too unbelievable to be tenable any longer, but you can bet that if the studio making this movie can find another way to make some sort of profit that they’ll come up with something they know that people will pay to watch on the big screen since that’s how the game is played. They rely on people that aren’t going to say boo to a movie that promises plenty of action, plenty of explosions, and the kind of character development that couldn’t challenge a pre-teen. I like Gerard Butler, don’t get me wrong on that count, I enjoyed 300, I thought Law-Abiding Citizen was insane but meaningful, and I believe that he’s a real talent in Hollywood, but these kind of movies are fodder at best for those that love a good action flick that won’t bother to challenge them with a new formula or even the hint that their hero might not see it through to the end. Bringing Nick Nolte into the most recent movie was kind of interesting but it also continued the idea that Mike is a bada** because of his upbringing, which means that he was born to be someone that kicks ass and takes names if anyone’s standing at the end. Like I said, hopefully the third movie is the last, but don’t hold your breath. Chris Thilk of The Hollywood Reporter has more to say on this.