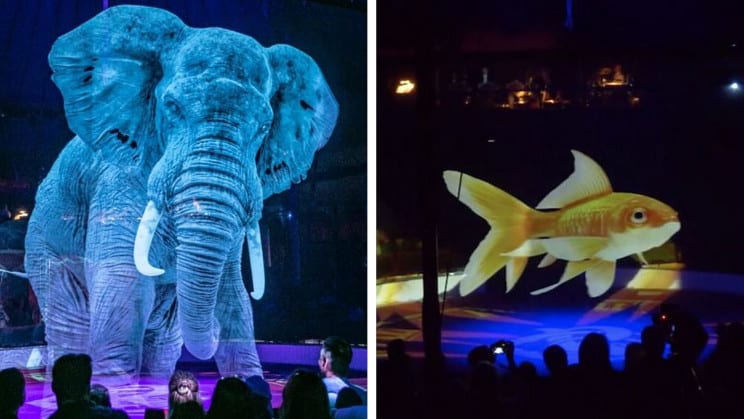 It’s hard to argue with this concept so I probably won’t since the idea of a cruelty-free circus is one that a lot of people will be able to get behind, and the cost of the system is likely something that would be offset by the realization that more people would probably be inclined to make their way to the circus to see such an attraction while being able to say that the animals involved weren’t being mistreated in any way. It’s hard to mistreat a hologram to be certain, but that’s also the beauty of what’s been done by the Circus Roncalli in Germany, who have taken to showcasing these technological wonders and stopped using living animals a while ago. Purists of the old days are likely bound to say that nothing beats the original, live performances, and at the risk of being controversial or even contradictory, they’re right as well. But the fact that animal cruelty and the mistreatment of many circus animals over the years has occurred is inescapable, especially since there are well-documented cases of such abuse that have been reported throughout the years. While what amounts to a very impressive and highly-detailed light show isn’t quite the same thing as reality, it’s still good enough to assume that people are going to pay for the opportunity to see these wonders.

Another upside of this spectacular light show is that unlike real animals, the projectors might be expensive and need to be tended, but they don’t take up resources such as food and space, and they don’t need to be cleaned up after. Those facts alone are enough for many people to see this as a big win. Those that continue to bemoan the realistic nature of the circus though are likely those that would seek to find any and every reason to deny that the projectors have any worth. It’s an argument that wouldn’t be easy to finish and one that is definitely too easy to make since the whole issue of animal cruelty is one that a lot of people agree on, but many might take overboard as well. To be fair, circuses have been around for a long time and have been every bit as entertaining as this new system could possibly be, but while it’s great that it will replace live animals if more and more acts agree to use it, the reality of it is…well, it’s not real. It’s an amazing light show, there’s no doubt about that, and it’s something that you can’t help but think would amaze children and those that are awed by the technological aspect of it. But it’s not real. That alone is why some folks would give a big thumbs down since they want to see something that’s a part of the real world like they are. But again, getting around animal cruelty and the danger to the animals just isn’t possible while wanting something that’s absolutely amazing. Sadly, there isn’t really in-between with this at the moment since it’s one way or the other, and the old way has already been deemed as harmful by many activists over the years.

To hear that anyone might be less than impressed by this type of circus is enough for many to think that some folks like and agree with animal cruelty, or simply can’t appreciate a solution that can end the suffering of so many innocent animals. But then again, anyone that would say such a thing is speaking from just as much ignorance as those they are deriding. The fact is that a real circus is a fun and engaging time, and there are circuses that do take great care of their animals and don’t mistreat them. Much like any industry though, circuses have been under attack by activists that take the worst possible examples they can find and then attribute them to every other practitioner in order to prove, without solid proof, that training animals in such a manner is utter cruelty and that it needs to stop. While this light show is humane and does offer a gentler way to show people the wonders of the world, it’s a wonder why such activists haven’t been visiting the zoos as well, since this feels like the next logical step. Perhaps they are seeking to do just this, or perhaps not, it doesn’t matter. The agreement is that circus animals do need to be liberated, but nothing is really going to take over for the real thing, since a light show is a light show, no matter how impressive it is. What’s really sad is that there’s no way to run a circus without some form of cruelty being used, otherwise if a circus could claim a permanent home things might be different. But this option is one that people will be pushing, and there’s no solid argument against it thankfully.