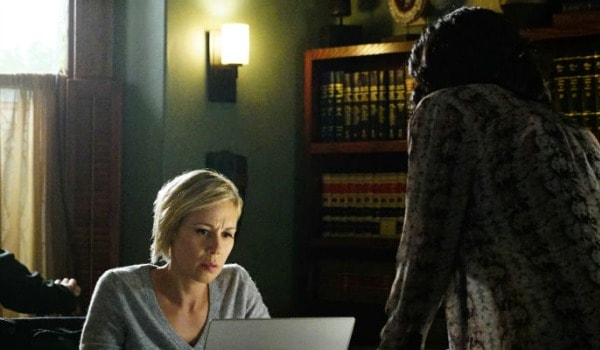 We’re pounding away at episodes ofÂ How to Get Away with Murder, and now we’re only one week away from the fall finale that will finally reveal who is under the sheet. We still have one episode to go before then, though, so let’s take a look at the newest episode, “No More Blood.”

The episode opens in the aftermath of the fire with Bonnie and Annalise talking in the latter’s cell about the anonymous source with evidence against the lawyer. Bonnie agrees to find out who the source is, but tensions are incredibly high between the two women. Because of this, we clearly see that something major happened in the week before the fire, and it makes the flash-forwards all the more interesting.

Rewinding a week, Frank is still at Laurel’s apartment. Annalise orders the girl to keep Frank there against her wishes, and Bonnie heads over there to deal with this situation. The main reason for the urgency, though, is in an effort to help Wes out. The gang is split over whether or not to use Frank, and the fact that it’s mainly to help out Wes doesn’t make things any better (Conner points out that their whole lives seem to be getting Wes out of trouble).

It’s been really interesting this season to see how the group that we’ve watched grow can be fractured in such a deep way because of what they’ve been going through. When you think about it, the Keating Five really have dealt with more than their fair share of tragedies and controversies over the last three years, and it does make a lot of sense that this would be happening to them. What I’m more interested in, though, is seeing how (or if) they come back together after the death that is only a week away.

Briefly, I want to mention how much I’m still enjoying the drama between Conner and Oliver. Their relationship often provides the most heart out of every aspect ofÂ How to Get Away with Murder, and, again, this season has been so strong in that aspect. I can’t wait to see more of this explored down the road.

The final scenes of “No More Blood” are some of the most powerful and well-acted that the show has ever seen, and it’s a testament to both the writing and the actors involved that it landed in the way that it did. The fall finale is really shaping up to be something special, and I’m sitting here in anticipation to see what happens next.

What did you think about the newest episode ofÂ How to Get Away with Murder? Who do you think is dead? Let us know your thoughts in the comments down below!

How to Get Away with Murder Season 3 Episode 8 Review: "No More Blood"

“No More Blood” sets up what looks to be an incredibly powerful and emotional mid-season finale.