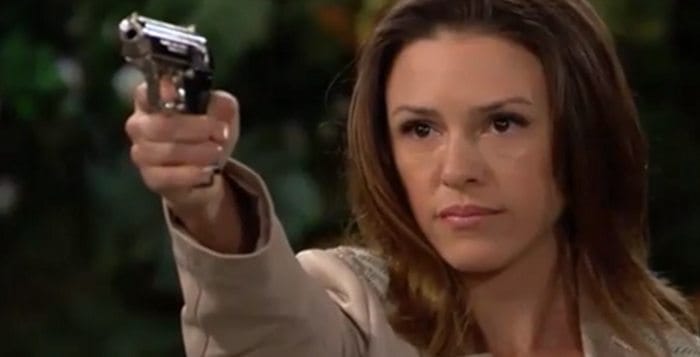 Young and the Restless fans love Elizabeth Hendrickson, which means so many people were beyond happy when she was brought back to the show after she was gone so long. She plays the role of Chloe Mitchell, and she’s know for her poor decision making, her bad choices, and her desire to do things that don’t always make much sense to anyone else. We love her, but there are not always people who get her decisions on the show. We want to ignore Chloe for a moment, though, and focus on Elizabeth. She is not her character, difficult as that often is to remember for many of us, and she’s known for so much more than that in her real life. Let’s get to know her just a bit more.

She Got her Start on Another Soap

You might love her so much here in Genoa City as Chloe, but this is far from the role that made her famous. In fact, she was made famous when she was cast as Frankie Stone on “All My Children,” which also turned into the role of Maggie Stone, identical twin sister of her main character. Fun fact about that role, too. She was not originally Maggie, but she did play the role so well that she was given a chance to be her own twin, and it was her twin who became part of a super couple with another woman. She could not make a heterosexual relationship work, but fans loved seeing the chemistry between herself and her friend Bianca, and that worked out well for everyone.

She was born and raised in New York City, though she did move later in her life to Long Island. They lived there as long as she was growing up, and that’s something that played a large role in her life as she knows it. Being part of a culture like that growing up can help shape you and make you a person who loves the arts and the many things that you can accomplish. It is the city that never sleeps, and it’s where many dreams are made.

Okay, okay. She’s not a table dancer in the manner you’re immediately thinking. She is, however, a table dancer in that she was 5-years-old when she took her talents to the table and danced tap at family weddings. It was nothing awful and ugly, but it was cute and adorable for those who got to see her and enjoy the time she performed.

The creative gene runs in the family. Did you know that Hendrickson’s cousin, Dennis Michael Lynch, is a famous documentary filmmaker? He might not be a household name to anyone who doesn’t actually pay much attention to the documentary world, but it is all good.

She Recently Got Married and is Expecting a Baby

She surprised everyone in her life with a June wedding in 2019. She married Rob Meder. They were engaged in December of 2018, and they are expecting their first baby in March 2020. There is some speculation she was already pregnant when she got married, but there’s also room for her not to have been. She could be due at the end of March, and she could have gotten pregnant immediately on her honeymoon. Or she could have been very newly pregnant on her wedding day and didn’t even know about it. Either way, who cares?

She Guest Stars a Lot

One of the things she’s famous for are her guest appearances. She’s been on some of the biggest shows in the game, including Criminal Minds and CSI: Miami. She’s also been on Cold Case and Law and Order SVU, as well as the role she played for a year on General Hospital as Margaux, the woman who came in and made a big splash when she did what she did. She had a good time playing that role in the time she was not being Chloe in Genoa City. But, fans cannot ignore the fact that she was sorely missed around here and we are all glad she is back and better than ever.