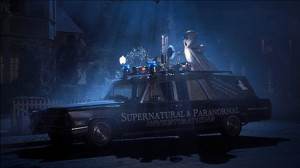 Last week, Sam was getting suspicious about Melinda disappearing all the time and not being completely honest about what she does.

Melinda and Delia are at the antiques shop where Melinda is getting ready for a date with Sam (obviously still giving her the benefit of the doubt). Melinda says she can feel Sam pulling back and she knows it’s because she keeps running out on him. Delia pretty much says “Duh” and that Mel has to be honest and tell Sam everything. Mel is afraid Sam won’t be able to accept it the way Jim did, but promises to tell him what she does.

Sam and Melinda are on their date, walking down the street when they spot a crazy looking hearse with “Supernatural Paranormal Investigations” painted on the side and a bunch of lights on top, which kinds of reminds me of a certain movie from years back… oh, very punny, show. Now where is Slimer? A young man gets out of the car and introduces himself as Linus Van Horn of SPI. Sam is highly skeptical and it’s all he can do not to laugh right in Linus’ face. Melinda decides that maybe this isn’t the best time to be honest with Sam after all, and makes a hasty excuse to leave. Anvil of foreshadowing, anyone?

Melinda and Eli can’t rule out that maybe Linus really can detect ghosts, but she doesn’t approve of the way he treats them like a carnival act. Eli goes to see Linus at the house where he’s set up shop, which just happens to be owned by some friends of Melinda’s. Linus shows Eli his electronic equipment (not the other kind!) and recorded images of ghosts. Linus says that his former girlfriend helped him by loaning him the money to get a new camera, and that he’s been seeing ghosts everywhere since he got it. Just then, Eli hears a ghost screaming (and I am amazed that Linus didn’t see the face Eli was making just then). Linus picks up the ghost on EVP, while Eli points him in the direction of the screaming. Linus catches the ghost on video and asks Eli how he knew where it was. Eli must have gone poof right before he answered Linus, because…

Eli is back at the shop, telling Melinda and Delia about seeing the ghost on video. He says he didn’t talk to it, but he’s going back to the house. Melinda tells him that he has to cross this ghost over on his own, because she can’t keep ducking out on Sam and doesn’t want him to see her there. Eli and Melinda discover that the former owner of the house, an elderly lady named Mrs. Bellsbury, was reported missing and that nobody ever found her. How Melinda’s friends ended up living in her house, I have no idea.

Sam is researching Melinda online, but he isn’t coming up with a lot. He finds a link with a description saying Melinda is hiding a big secret, but the link is dead when Sam clicks it. He gets frustrated and powers down the computer. Sam may not have found anything, but we get a Sam Sighting. Drink!

Eli pays a visit to the neighbor of the missing Mrs. Bellsbury. His dog is barking insanely the entire time, maybe the dog knows something about Eli that we don’t. Or just finds him annoying and also wants Professor Payne back. The neighbor says she was a very sweet old lady who baked all the time, in fact they called her Mrs. Blueberry for her blueberry tarts. I don’t know why it had to be tarts and not muffins. Blueberry muffins, yum! Nobody knows what happened to Mrs. Blueberry, one day she just disappeared with a fresh batch of tarts cooling on the window sill that ended up dumped into the yard. I know, who doesn’t have screens on their windows these days?

Sam goes to the shop looking for Melinda, but Delia doesn’t know where she is. Sam takes advantage of the chance to ask Delia some questions about Mel. He thinks there is more going on with her than she says. Delia hints that there is, but probably not in the way he thinks, and that he needs to keep an open mind with Melinda. Very open.

Eli is back at the house with Linus, where they pick up ghost activity. In a funny sequence involving night vision goggles, they follow the ghost’s very obvious (like, stupid-obvious) trail to a room where there’s a hole in the wall. Inside the wall are empty boxes of cake mix and a savings passbook dated 1999, in Mrs. Blueberry’s name, showing that she withdrew all her money but it’s not there. Eli thinks maybe she was killed over the missing money.

Eli goes to Melinda’s and shows her Linus’ website, where he has uploaded images of the ghost. Sam walks in and sees the website open on Melinda’s computer, and tells them he doesn’t believe in ghosts. At all. Period. Fin. Afterward, a sad Melinda tells Eli that Jim always believed in her, even when he couldn’t see anything himself.

Melinda and Eli go to her friends’ house, where they’re loading bags into the car. They tell Melinda that the house is definitely haunted, and that they can’t stay there with all the doors opening and closing and jars banging in the basement. Melinda wonders about the jars and thinks maybe Mrs. Blueberry was stocking up for something. Just then, Linus picks up activity and rushes out to get Eli and Melinda. Seems she isn’t going to be able to duck out of this one after all. They hear noises and go into the basement, where Eli hears a scratching sound. Melinda sees a ghost, but it’s a man in a uniform scratching at a wall which turns out to be a hidden doorway. They open the door and inside is what used to be Mrs. Blueberry. Melinda says her spirit has been gone a long time, and she has no idea who the other ghost is.

Later we find out that the missing money was found in the room with Mrs. Blueberry, along with several jars of food and other provisions. Mrs. Blueberry wasn’t murdered at all, but got locked in her panic room while stocking up for Y2K. They still have no idea who the other ghost is, but Mel thinks maybe he’s attached to Linus.

Eli goes to meet Linus for coffee, and Linus can’t believe all the calls and hits on his website. His business is going crazy. He wonders why Eli doesn’t try to make money doing investigations, and Eli says he’s not in it for the publicity. Maybe a shrink that chases ghosts wouldn’t be the best thing for a psychiatrist’s business, either. Just sayin’. Eli asks how Linus got into this in the first place, and Linus says that when he was nine his best friend died. He thinks his griend has been watching over him all this time as a guardian angel. Linus also tells Eli more about Kerry, his former girlfriend, who bought him the camera that picks up ghosts everywhere. Eli muses that maybe it isn’t Linus’ childhood friend isn’t his guardian angel.

Sam pays Eli a visit, and asks how it is that Melinda always seems to be involved when a dead body turns up. Eli gives Sam an incredibly ridiculous story about how Melinda is secretly a profiler “for the feds”. Somehow Sam would rather believe that than accept ghosts. Silly Sam.

Melinda goes to see Kerry and asks her about Linus. Kerry reveals that her father died, and how he didn’t approve of Linus when he was alive and ridiculed Linus’ beliefs. Way to get subtle with the theme there, show. Melinda asks if Kerry has a picture, and it turns out that Kerry’s father is the ghost that led them to Mrs. Bellsbury.Mel thinks that’s a little convenient, but Eli tells her not to mock Linus because the ghost is making him look good. Mel wonders why the ghost is helping Linus.

Meanwhile, Linus is meeting with new potential clients, who essentially think he’s off his rocker. Linus asks why they called him if they don’t beleive in what he does, and they tell him both their sons had his website open on their computers – the boys claim to know nothing about it.

Eli and Melinda make their way to this clients’ house (very convenient) and Eli admits to Melinda what he told Sam. Melinda can’t believe he said something so ridiculous. Just then, one of the boys comes running out of the house, freaked out and saying he’s seen a ghost. The boy runs into the street, and is nearly hit by an oncoming truck – driven by Sam. Again with the convenient plot devices! Sam is upset by nearly hitting the boy, and lashes out at Linus when the boy says he saw a ghost. Sam continues his tirade until Melinda is forced to tearfully admit that she believes the boy – because she sees ghosts too and has since she was a little girl. Definitely not the way she wanted this conversation to go.

But Melinda mans up, because there’s a ghost to be crossed over, you know. Mel and Eli are at the park with the ghost of Kerry’s father, when Kerry and Linus arrive. Through Melinda, the ghost tells them how sorry he is for never believing Linus but he didn’t know the truth until he died. He tells them he couldn’t cross over because he felt so guilty about breaking them up, so he tried to help Linus to be a success so they’d get back together. Linus and Kerry reconcile, and the ghost is free to cross over.

Melinda wonders why it’s so hard for Sam to believe her, and ouch with the anvils!

Sam comes to her house (which is a long way since he lives in her garage), and says he’ll understand if she doesn’t want to see him but he needed to talk to her. He will try to understand about the ghosts, but he needs time. Melinda tells him to take all the time he needs, pleased that he’s making the effort.

Next week, Sam is still making the effort. At least there’s that!