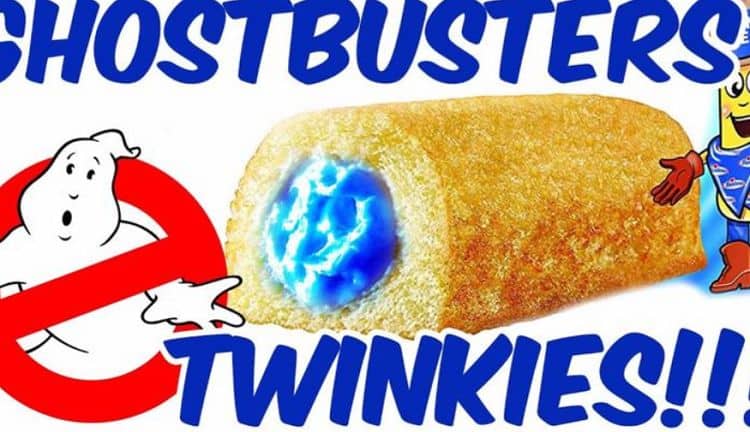 There’s always bound to be something that will be trotted out to promote a new movie, especially when it’s a movie that’s been desired and anticipated by the fans in such a big way. But really, a ‘blue slime’ Twinkie looks kind of suspect to some while others are actually kind of primed for it and will undoubtedly buy a couple boxes when they get the chance. Jeremy Dick of MovieWeb has more to say on this subject. It’s not too surprising really that Sony and Hostess would team up for this since it’s a good business plan on paper, but one has to wonder just how far the gimmick will go. Likely before the movie Ghostbusters: Afterlife releases the sugary treat will sell fairly well since people love supporting a gimmick, and during its release the product might sell even better. The Twinkies are already making their rounds on social media obviously and people are either getting excited or raising their eyebrows in uncertainty at the treat since a Twinkie with blue cream does look a little suspect until one realizes that it’s all for show and that it’s really no different than a regular Twinkie despite the color of the filling. It’s almost a thought that they might have used green instead of blue for the filling since that might have given a better indication that it was for the movie, since the blue color is definitely more akin to the 2016 reboot that some folks are still thinking should have been given another chance. As Jeremy Dick reminds us though Hostess DID use green filling for the reboot, though it’s hard to know if anyone still remembers.

Afterlife has already been subjected to criticisms that have had a lot to do with the fact that the 2016 movie was considered all kinds of terrible by fans and critics alike, but still should have been given a lot more credit for various reasons. The use of the original cast in the movie was cute and witty to some but to others it felt like a playful slap in the face reminding them that the past was bound to be topped by the present at some point. Fans however weren’t having it since many of them turned on the female-led movie in a big way and despite the fact that it didn’t have the worst outing in history it just didn’t resonate with a lot of people that ended up missing the old days with the original crew. In a sense the most recent movie wasn’t all bad, as there were enjoyable moments that helped to keep it alive in a way, but overall it felt like too much of a snub to the first two movies and a lot of fans weren’t buying into it.

It’s kind of amusing then that the feeling was mutual when Ghostbusters: Afterlife was announced, and it wasn’t much of a surprise when one of the cast from the 2016 movie lashed out and made it clear that she didn’t appreciate the idea of just ‘dumping’ the all-woman cast to go back to the original story. Vishal Tiwari of Republic World has another bit of information to add to this thought. But wasn’t that what the 2016 movie was trying to do when they went off in their own direction though? Anyway, the argument is still out there and still drawing in a few people that might want to debate just which team of Ghostbusters was, or is the best, but at this point a lot of fans are more than willing to head back to the originals and start anticipating the release of Afterlife when it finally hits theaters. It’s safe to assume that many people will be willing to buy any new or old merchandise that’s been spawned from the movies, and blue cream Twinkies are definitely going to be on the list among other things since there’s nothing like pushing whatever can be pushed when a new movie that’s already favored by the fans is about to come out.

Likely as not there will be a couple of other items that will hit stores before Afterlife makes its way to the theaters and it could even happen that theaters will come up with their own promotional deals that pertain to the movie. But one thing that’s also true is that the moment the movie becomes less than the hottest news around, as it does happen with every movie eventually, those promotions will fade and it’s likely that we’ll continue to see blue cream Twinkies in stores for a while longer before they’re finally taken off the shelves or sold out. Jason Fitzsimmons of Ghostbusters News has more to add to this. After all, a promotion usually has a shelf life that coincides with the phenomenon that it’s tied to, as several things have come and gone according to the movies that were popular at the time. Remember when Jurassic Park first came out? There were dinosaur-themed products everywhere, and while there still are, they’ve definitely lost some of their appeal throughout the years. The Twinkies will do the same, and probably quicker, but at least while they’re here we can enjoy them.