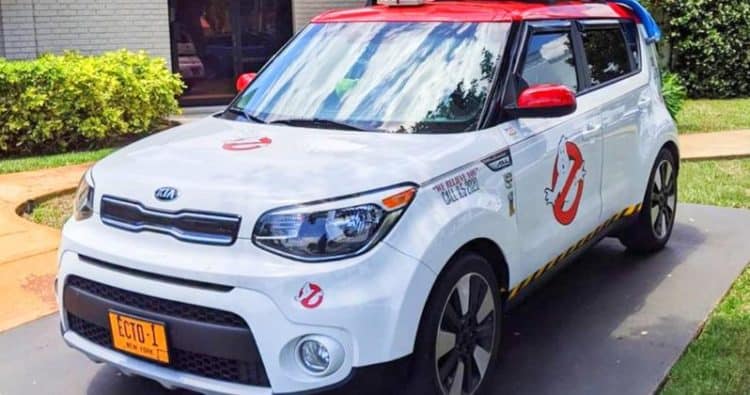 It kind of goes without saying that any spouse of a guy who would turn the family Kia into another version of Ecto-1 has to be a little supportive, but thankfully for Stephen Wittmaak, his wife understands and despite not being a member of the Lost Spirits Division that her husband belongs to, she’s very supportive. There are bound to be people who would think that this is pretty silly and not as mature in the least, but the fact is that Stephen and his family have contributed to and been a part of making people smile in various ways as they’ve driven around in their own Ecto-1, which has plenty of interesting features that make it more than a little impressive when on the road. From just driving around the neighborhood to being a big part of fundraisers to comic conventions this rig has been around, and it’s been able to make people smile wherever it goes. It’s true that this kind of thing isn’t what some folks might think of as the norm, but it’s become a part of the Wittmaak family and at this point a means of joy for a lot of people in their area.

The Kia Soul is definitely more cheerful than the original Ecto-1 since fans should recall that the original vehicle was originally a broken-down 1959 Cadillac Miller-Meteor Futura Duplex limo-style end loader combination car. In other words, it could serve as an ambulance or a hearse, but many people today would see it simply as a hearse thanks to the common use that’s been featured in the movies and on TV. The original Ecto-1 was pretty beaten up and needed so many repairs that the work would have ended up costing more than the car was worth. But this version, which was no doubt spendy when it came to achieving the signature look, is definitely a huge upgrade. It does feel that several teens would be a little embarrassed to ride around in such a conveyance, but at this point, Stephen’s kids are still young enough to think that it’s cool and exciting to ride around in the Ecto-1. Any embarrassment will come if their father still has the car in a handful of years, and even then it’ll still be worth it.

It would appear that fan groups focusing on the Ghostbusters have been around since the 80s, when the original movie was first released, and have been sticking together over the decades to entertain people and stay true to their favorite franchise. There are plenty of folks out there that would call this geeky, immature, possibly even less socially responsible, but they couldn’t be more wrong since Stephen and those that share this interest have been able to bring a great deal of joy into the lives of many people. No matter how goofy the movies were, and they kind of were but in a great way, Ghostbusters has been one of the biggest influences in American culture for years since many upon many people know at least a little bit about them if not that much. And being able to get people to smile when they see a car like this coming down the road is definitely worth it.

Granted, not all of us are going to don the suit, the pack, and shell out the kind of money to convert our cars into this, but the love for the Ghostbusters that’s felt by so many is obvious when people honk, smile, wave, and generally acknowledge this kind of effort. It’s a part of the nostalgia of course, and it’s also something that people want to acknowledge is still appreciated in this day and age since the Ghostbusters were a part of a lot of our childhoods growing up, the movies, and the animated series. As a part of pop culture, the Ghostbusters have been there for long enough that people tend to count them as one of the best parts of the 80s and the current era.

There’s no telling what Ghostbusters: Afterlife is going to be like, but the fact that it’s coming out this November and is bringing back most of the original cast is something that fans are already excited about since the additions of Paul Rudd, Grace McKenna, and Finn Wolfhard are bound to be interesting as Bill Murray, Dan Aykroyd, Ernie Miller, Annie Potts, and Sigourney Weaver are all slated to return. So far the trailer has told people a little bit, but there’s still enough left to wonder about that will get people moving toward the theater when the time comes. One thing you can bet is that Stephen and his family will be making sure that Ecto-1 makes an appearance. Just think of how cool that would be to attend a showing of the new Ghostbusters movie with Ecto-1 parked outside. Oh yeah, my inner nerd is already cheering, how about yours?