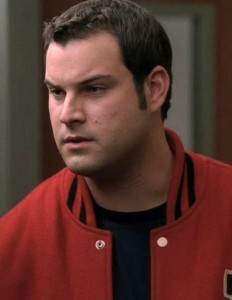 Glee tackles some difficult subject matter in its fourteenth episode of season 3 and winter finale “On My Way,” as the New Directions perform at Regionals in the wake of some devastating news, and Rachel and Finn move up the date of their wedding as well. A very controversial episode, we here at TVOvermind have a few different reactions to the events of “On My Way,” and we also encourage you to join editor Clarissa Rocco’s discussion of Glee as a series at large.

There’s a lot to talk about with regard to last night’s Glee ‘On My Way,’and a million ways to begin an article like this. Frankly, I feel humbled, and even honored for the opportunity to deliver some thoughts on such a broad spectrum of issues, so I’m going to do my best to make some honest points without overstepping any of my bounds. In that way, I almost become Glee itself. Minus any of the musical talent.

Now, I don’t generally like Glee. I’ve watched it from the beginning, and never miss an episode, but somewhere amidst some well-written drama and fantastic musical performances, I found myself dropping out of any real investment in the show. By the time Will Schuester donned a matador costume and Ricky Martin mugged for the camera this season, I realized that no amount of whiplash-inducing plot progression, Sue Sylvester machinations, or relationship mix-and-match held any meaning anymore, as if Glee had simply become a swirling mass of soap-operatic drama, and inconsistent characterization. I’m well aware of the history behind the show, and remember walking into season 3 on a note of optimism that allowing the show an actual writers’room instead of alternating between scribes would do wonders for the series’development.

Well, that didn’t work. And even now, I feel notes of encroaching hope that moving certain characters out of high school and into more adult situations in the fourth season might bring some life to the troubled series, but at this point we might just be wasting our time with a show that never quite figures itself out. In a way, that’s almost exactly the kind of space Glee itself seeks to explore, that search for identity, and the struggles to define one’s future in the face of the omnipresent ‘real world,’but the show runs into a number of difficulties when it can’t decide on the reality it wishes to present, either a heartfelt drama about teen love and social issues interjected with some joyful noise, or a caricature of cartoonish teenagers.

I do my best to avoid spoilers prior to viewing episodes, but checking up on Twitter and Facebook last night inevitably led to some awareness that ‘On My Way’would be a controversial one, and I’m always on edge about how I let word-of moth affect my judgement of a particular work, given that I tend to be something of a contrarian. That said, I had a very different reaction the episode than I expected, minus of course the mixture of eye-rolling and laughter that stemmed from its ‘twist’ending, but we’ll talk a bit more on that later. 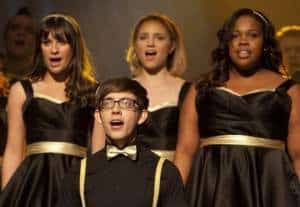 Let’s face it, Glee isn’t that great of a show these days, not that it ever has been, but it mines some pretty powerful drama now and again. And as much as Ryan Murphy tends to use the show as his personal soapbox or an after-school special, there are a lot of really talented performers in both music and drama making the best of limited, and often controversial material. For that, I thought ‘On My Way’deserved some attention, in the way Glee managed to broach the difficult topics of teen suicide, homophobia and bullying. Mind you, I’m just a straight kid from New York City who’s had gay friends as far back as he can remember, and I thank Buddha and the Flying Spaghetti Monster every day that I never had to suffer through the kind of horrors that Dave Karofsky (Max Adler) or Kurt Hummel might endure on a daily basis, but the fact remains that these concepts are all-too-real scenarios that exist in schools all across the country and even the world, let alone Lima, Ohio.

And I’m not here to make some powerful speech on the nature of tolerance or pretend that I could ever have any real input into something as devastating as sexuality-related suicide, but Glee inevitably faces some sharp judgment for the manner in which it approaches such a wide topic. I’ll understand if ‘On My Way’didn’t click for some people, notably in the way it somewhat stylized Karofsky’s suicide attempt against Blaine’s ‘inspirational’performance about cough syrup, but for my part it seemed like Glee tackled the idea just as messily as it tends to unfold in real life. There’s nothing elegant or romantic about suicide, however performed, and quite often it presents as a rash decision made by frightened people who are sometimes only-briefly swallowed by the idea that they can’t find the strength to endure.

Even in a TV series afforded the time to carefully plot out such a difficult development, I appreciated that ‘On My Way’made no effort to present Karofsky’s ordeal as anything other than it was; a confused and fragile teen briefly overwhelmed by the prospect of being outed within an intolerant community. And as much as we liberal artists, city-folk and east/west-coasters like to pretend we have the market cornered on tolerance and understanding, the simple truth is that tragedies such as this are very real, and take place in every corner of the world, daily. For a brief moment I even wanted to jump through my screen to respond to Quinn’s assertion that Dave’s suicide attempt represented a cowardly and hurtful way of dealing with his pain, if only to press on her that while I don’t disagree with that assessment of self-inflicted harm, the time for such thoughts should arrive long after the sheer weight, and relief of Karofsky’s survival had passed. That was the most I ever found myself wanting to join the conversation Glee creates, and even if ‘On My Way’presented its ideas in a rather hap-hazard way, I have to believe the show at least did a good job in delivering some emotional honesty. I felt every bit as at sea over Karofsky’s suicide attempt as Kurt, Mercedes, Sam and Quinn’s ‘God Squad,’or Glee‘s principle faculty, who promptly drop any pretense of inner squabbling to let the horror wash over them. I’d be just as confused as Emma over who, if anyone, should consider themselves responsible for overlooking the danger Karofsky faced. 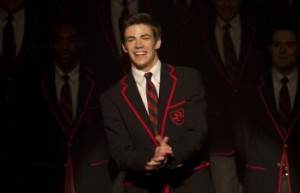 There’s a lot more to take in about ‘On My Way,’though clearly none of the New Directions’ victory over the Warblers at Regionals, Sue’s supposed pregnancy, or even Finn and Rachel bumping up their wedding will register as deeply as the discourse created over Karofsky. In truth, I barely even paid attention to any of the musical numbers, as however matching Glee‘s usual standard of quality they might have been, they mostly felt like padding for an episode that wanted to tread some richer landscapes. In retrospect I suppose it might have been a little disorganized to weave Karofsky’s suicide attempt, a wedding and the rather time-consuming Regionals performances into one narrative, but I mostly gave that a pass on account of how these things never happen at a time even minorly resembling ‘convenience.’

I wasn’t even bothered by the absurd drama of Finn and Rachel moving up their ill-conceived wedding, as much like Karofsky, these kinds of things happen every day in the real world. For every troubled teen who does something rash to cope with bullying, there are others looking to make commitments as deep as marriage right out of high school, and Glee hasn’t created any real impasse for why the two shouldn’t be together other than the obvious concerns about teen marriage. And good for Glee, really, for keeping a level head about the idea, and presenting both sides of the equation somewhat respectfully with another guest appearance by Jeff Goldblum and Brian Stokes Mitchell as Rachel’s parents.

And then Quinn got in a car accident, for…some…reason. I don’t mean to present that point so clumsily, but it really wasn’t displayed with any more grace by the episode itself. Quinn has never been a strongly written character to begin with, but ‘On My Way’lost almost all of the good will it created with such a telegraphed, and unnecessary twist. Car accidents in TV series can be just as deadly, and every bit as unexpected as in real life, but there are a million better ways to introduce dramatic pathos for Quinn and the other characters than to ham-fistedly set up some last-minute punch. Seriously, between Glee and The Walking Dead, women drivers are on fire these days.

So that’s it, really. A good deal of ‘On My Way’doesn’t work, and I expect people’s reactions to be very much across the board, but I found a lot of the material powerful enough to warrant some consideration, and I hope you did too. And it should go without saying that there’s always something to live for, and if any of you out there harbor those kinds of thoughts or know someone who does, drop everything this instant and find the people willing, and eager to help.

I’d like very much to hear your thoughts and reactions to Glee‘s ‘On My Way’in the comments section below, but so help you if any posts for one moment take a turn toward the negative or hateful, they’ll be gone.