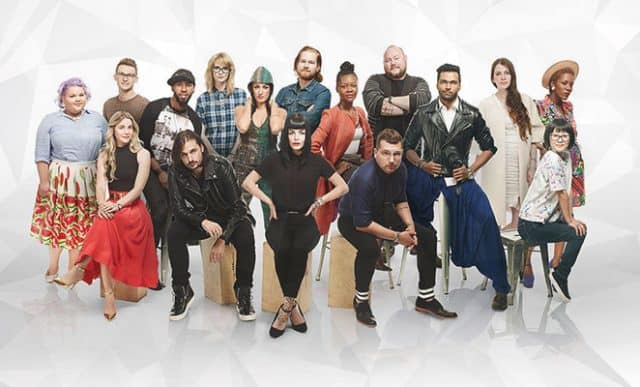 When Project Runway’s Season 15 Episode 1 aired on September 15, 2016, 16 talented designers faced each other, prepared to fight their way through a long series of design challenges. The competitors first met each other at a launch party, arriving in New York from all over the country. They shmoozed with champagne, chocolate and other treats in a festive room, and were introduced to the show’s host, Heidi Klum and mentor Tim Gunn. In a surprise announcement, Heidi told the group that their first challenge required using materials available at the launch party. The contestants trashed the room, trying to find the best of the unconventional materials available.

By the end of the episode, the first designer to leave was Ian Hargrove, whose shift style dress decorated with polaroid photos and fringe disappointed the judges. Hargrove felt he went minimal, stayed true to his aesthetic and believed his work spoke for itself. He was sad to be leaving, and felt that, in the end, “maybe it just wasn’t my time”. Hargrove was Out. Erin Robertson was the Winner.

In the eight episodes to follow, the designers worked their way through a series of challenging design assignments:

Putting all the creative differences aside, and forgetting all the catty comments, the remaining eight designers after Episode 9 include a mix of the best of the best and the most creative. Nathalia, Dexter, Erin, Roberi, Laurence, Cornelius, Mah-Jing and Rik are still standing with plenty to prove in the episodes ahead. But, there are a few compelling trends to note. Looking only at the challenge winners, it’s easy to see that three designers have each won top honors twice:

The remaining designers who have won one challenge each include:

Designers who have not won any challenges:

The designers who have consistently been in the safe categories and have created styles which the judges love include Laurence, Rik, and Roberi. Erin has also been a contender, though she has struggled more lately with her looks, and Tim Gunn has noted that her looks are repetitive lately. Dexter has remained in the middle of the group, safe. Recently skirting along the bottom of the results have been Nathalia, Mah-Jing and Cornelius. Cornelius was thrown under the bus by both his co-designers and the judges, but was saved when Tim Gunn used his precious one time save. Cornelius may or may not have what it takes to persevere, and his constant bickering with Dexter has been pushing buttons, too. Dexter, Cornelius, Nathalia, Mah-Jing and Erin will need to focus on their work more consistently, based on the events in episodes so far.

A considered guess at which designers will be in the top five include:

These top five may have the best shot at winning Project Runway this season, though with the varied strengths of the eight contenders, the top spot is still up for the taking.