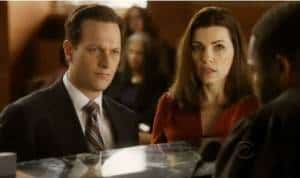 Just when I thought that Derrick Bond was out (because where the hell has he been?), he’s in the office and talking about keeping Diane on the payroll for the next two months before forcing her out. I guess he’s really good at making entrances. Now I just want him gone. If the show runners felt they made a bad choice and wanted him off the canvas, there were other ways to do it without them making him a complete ass of a human being.

There is so much happening behind the scenes. Blake was made Kalinda’s supervisor? Where did that come from? We found out, but until then, I didn’t like the direction we were heading with the civil war and break up of the company. They were all taking up sides, keeping secrets, digging into backgrounds with no reason. It was getting ugly and infringing upon my enjoyment of the normal discomfort we witness with downright ickiness. Ordinarily, their uneasiness with each other can be delightful; but too much is too much. When Will and Diane finally found common ground, I felt relief. While the idea of two separate firms was palatable and ripe with story possibilities, together; they are a family. Dysfunctional, but that’s what The Good Wife is all about.

I really hope that a judge would not be biased toward a defense attorney because of a basketball game, but somehow I imagine real life is very similar. Alicia’s “no harm, no foul” comment was brilliant and I love the way she handles herself in situations with such straightforward fearless resolve. If she has a moment of hesitation, only the viewers ever see it and, even then, it’s brief. 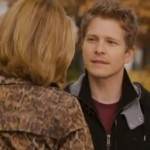 As much as I love Cary, there is no way I’m going to support Lockhart Gardner bringing him back at double Alicia’s salary and in a senior capacity. Frankly, I love him being the sole ADA assigned to their cases, and if that keeps my dysfunctional group working at 120%, and still allows him to play an important role, I’m good. Diane has gained respect for Alicia brings to the firm, so I anticipate their roles will remain in tact for some time.

Mr. Microburst, who lead to Kalinda getting a FIFTY THOUSAND DOLLAR increase in her salary (go Kalinda!), is strange. The way the case ended, I have to assume he will somehow play out in this whole Derrick Bond turmoil. I’ve become so suspect that now I think everything will play out in that mess.

It wasn’t my favorite episode, but they made great inroads with the firm, and my hope is things will remain just a bit askew. It makes for quite dramatic viewing.