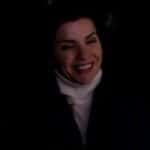 As Alicia is canvassing a neighborhood for people to join a class action suit against a large pharmaceutical company for causing devastating fertility problems among the community’s residents, she learns another lawyer is trying to gather clients for a class action of his own. The Good Wife welcomes back Michael J Fox as Louis Canning. The last time we saw Mr. Canning, he was working on behalf of the same pharmaceutical companies he is now purporting to avenge. With his physical affliction, not easily missed visually, but never allowed to go unknown in his presence. He uses it like a badge of misfortune to get the neighbors to feel he is more amiable to their plight than Lockhart Gardner. 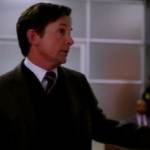 Michael J Fox has not lost the intensity of his ability to act. What’s funny is that once he came down with Parkinson’s, gone were the goofy, lovable characters he played in the past. Instead, he has focused on being an almost sinister presence in his roles. I can’t help but wonder if his options have been limited because people are afraid to allow Fox to be funny. Would it feel right to laugh at a man with Parkinson’s; even one that made his career by amusing us, his audience? I sincerely hope that isn’t true, because I miss his more humorous moments.

The Peter Florrick campaign seems to be run totally on the merits of which side makes a better YouTube video. Every week, its a new campy, ridiculous attempt at one side to, what, disengage the 18 year old voters? The gag has gone on so long that I can’ take it any more. There are so many good things done on The Good Wife that to show politics in the light of treating voters as morons is becoming offensive to me as a viewer. When the lines of his campaign are running concurrent instead of intersecting with Alicia’s story, I’d rather they left it out all together.

It took me 45 minutes into the episode to realize that the judge on the pharmaceutical case was Russell Edgington (Denis O’Hare) from True Blood. It never ceases to amaze me how a good actor can be so utterly indistinguishable from one show to another, in spite of the similarity of voice and face. I was bowled over when it hit me who he was. I just had to share, because it is a great testament to the quality of acting we’re privy to with Mr. O’hare. 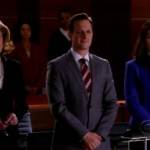 Derrick Bond has one more foot out the door and the right that was wronged at the beginning of season two can finally come to a conclusion. I’m looking forward to his disappearance and what might happen to Blake almost as much as I am awaiting the end of Peter’s campaigning.

We had another week where we saw the different directions Will and Alicia are taking in their personal lives even though we outside viewers know information that could turn that tide in an instant. Will and Tammy (Elizabeth Reaser) finally decide on some sort of non-committed commitment (if that makes any sense) and we leave the episode with a shot of Alicia and Peter in bed together, chatting and laughing about their day. She took his ultimatum about not wanting to live the life of his parents last week, and the scene seemed fitting. If Will wasn’t still in the wing, I’d almost believe in a happily ever after for Alicia and Peter.