Not being mathematically savvy, I have no idea how to compute what happened in “Ham Sandwich” in relation to the supposed mathematical theorem of the same name. Perhaps some astute viewer who does not suffer the same challenges as I will jump in and lay it out for me. In the meantime, I’ll share some less than genius level thoughts with you about the show as I saw it. 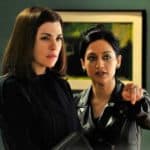 The big reveal at the end was not a surprise to me at all. There were several instances when I knew Kalinda and Peter shared a past. One was when she visited him in prison. Their mannerisms, their semi avoidance of eye contact, their appearance of total professionalism in spite of having worked together all lead me to believe they had shared a bed. I guess this was big news for some viewers, but I wouldn’t let it worry you.

If Alicia was able to forgive her husband his indiscretions, she will be able to do the same with Kalinda hers, should she ever find out. We don’t know that she ever will find out, although I think the love and respect that Kalinda feels in friendship toward Alicia will lead her to spill. Soon. She will not want to jeopardize their relationship by Alicia finding out from a third party something that happened even before they met. Alicia and Kalinda have become the heart of the show; to lose them would be unforgivable.

I wish Lockhart Gardner had not taken Bishop on as a client. What were they thinking? Lack of money is the root of all evil, but taking money from evil clients doesn’t help you down the right path. Watching the scene when Bishop told Alicia he had just “fallen out of love” was downright chilling. Wearing a good suit, with a smile on his face, he looked a man accusing him of murdering his wife right in the eyes, without a care in the world. The resurrection of Lockhart Gardner will not be done by representing clients such as Bishop. 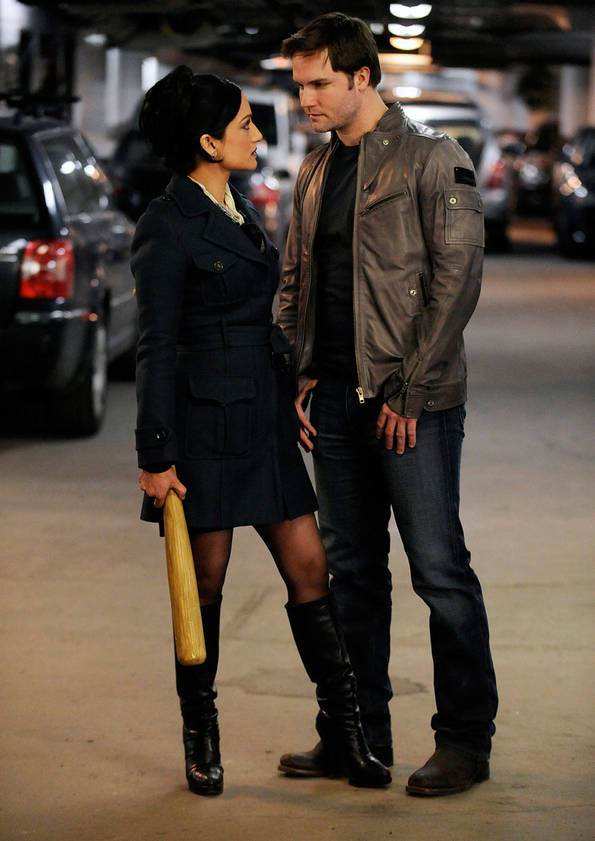 Perhaps this all rings back to the above mentioned ham sandwich equation, but I don’t understand how the grand jury was using Kalinda as a scapegoat to go after Lockhart Gardner and Alicia in particular. I’ve obviously lost a few IQ points this week, because so many things were flying just under my radar. Explain please!

I hate politics. I general anything done with politics is unsavory. Rarely is there a good motive used by someone to try to “win” a seat in office. Because Peter’s opponent is black the new tactic is to placate the white vote. What a load of crap. I’m so sick of the race card being used…well, anywhere. I’m over it. I want Hollywood to be over it, too. They claim to be, but then we’re subjected to stories like this and I want to rip my hair out.

The Florrick kids have been pains since the get go, but not more so than when Grace started on her Jesus trip. No offense toward Christians, because I think whatever she is doing has absolutely NOTHING to do with faith. She was grasping at straws and one of them just so happened to be religion. To meander into the “do you think Jesus was black?” bit felt like slapstick. The look on Eli’s face. I mean, he’s a Jew!

Eli has been such a bright spot for the second half of this season. Ever since they celebrated the Jewish holiday at the Florricks, he has been wonderful to watch. His exasperation at Grace’s comment was impossible to hide and actually made me laugh out loud. I like the new, fresher Eli, with the wickedly funny sense of humor. I hope we get to keep him around for a long time.

So what’s lies ahead? I suppose the secret and it’s aftermath. The election results. Suiting the children up in straight jackets (I jest, I jest!) and waiting to find out on what side of the law Lockhart and Gardner wants to lay their cards. The mystery of Kalinda’s life “before” she was Kalinda is bound to be a slow reveal. She was probably a lonely housewife who wanted excitement. Wouldn’t that be a hoot?

So lay your wisdom on me folks! Fill in the gaps, inform the uninformed (that would be me). Have your way in the comments or in the forum!!