Knowing I am in the minority, I still enjoy the hell out the scenes with Alicia and her brother, Owen. I really buy their sibling relationship. “The sultry eyed Will.” And he acts out his imagining of sultry eyes. Bobbing his head to gospel music with a goofy look on his face. He’s just enjoyable to watch. Light and fun. And the good news? He’s moving to Chicago. That means more Owen for me to love. For those of you he has not yet won over, to who else does Alicia open up with such candor? He makes Alicia seem so amazingly genuine.

Patrick Edelstein is much like the Facebook gurus, a nobody code genius. He’s had a movie created about him, “an imaginative recreation of events” according to the opposing lawyer. But it’s clearly not true, and he wants everyone to know it. But defamation of character cannot be proven without malice aforethought. I seriously don’t get that. If I write a movie about a doctor, who has, perhaps created a new vaccine, and nothing in it is true, I can do so without retaliation? That does not seem right to me at all. I always learn something new about the law on The Good Wife, I sure hope it’s accurate so I can use it in casual conversation without sounding like an idiot.

Cary is continuing to protect Kalinda as they try to determine if she beat a man with a baseball bat that she agreed to owning. We know Blake did it, but they have to prove it, and Cary can’t watch his friend under attack. Just more ammunition to add to my already full arsenal of infatuation for Cary.

F. Murray Abraham is playing opposing counsel in the defamation case, and he looks great! He looks healthier than he has in ages. Nice guest role, lending even more credibility to an already plausible program.

Was I the only one who had a moment of nausea when Alicia was sitting on the floor between two beds in a cheap hotel? So many stories of what happens in hotels, I can’t even sit on the floor of a 5-star.

Rita Wilson had a cameo as a friend of Diane’s who asked them to step in for her while she was out otherwise carousing. I have no idea the point of her role. It lent nothing to the overall story and almost added a bit of humor, if it had been a less pitiful type of funny.

It has taken me the entire series to realize that Jill Flint (of Royal Pains) plays Kalinda’s ex lover. Yet another actor who is able to be two completely different people to me (last week it was guest star Denis O’Hare). There is something about acting on The Good Wife that brings out the absolute best in it’s actors.

There was a shining come to Jesus moment between Blake and Kalinda. Right down to their skivvies as they tried to come to an understanding, but it ended with them still lacking trust of one other. If the TSA conducted searches in the same manner, I think we’d all be running to catch the next flight. Unless it’s just another ploy, we now have confirmed that Kalinda is good for all of us, gay and straight; we all have a chance. Archie Panjabi just sets the screen on fire, doesn’t she? What I didn’t expect? That she had a husband. That being her big secret never even crossed my mind. 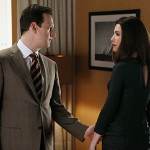 Alicia being conflicted about Will is great drama. But play as they might with the topic, and the great conversations about it with Owen, I know nothing can ever come of it. The title of the show is The Good Wife. If she explores being less than the good wife, won’t that create more than just a little turmoil on the show? As Owen says, she can’t cheat. It’s not in her makeup. As long as she is to remain The Good Wife we are going to have to settle with her marriage to Peter. But why did Will lie about the phone call? She finally had the guts to ask, and he lied. Dragging out the drama; a drama that can never be. Oh the frustration!

My assessment? A- Brilliant as usual, but just a little too spread across the board to be perfect.