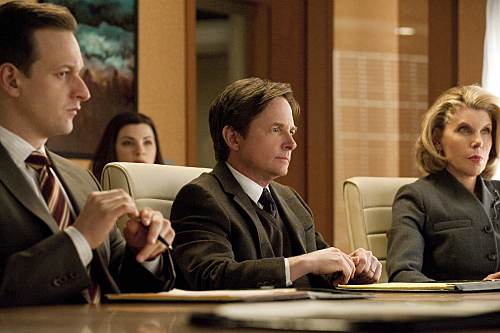 Things are heating up politically on The Good Wife. Last night’s episode left Peter and Eli without any more funds to continue their campaign, but knowing the two of them, they’ll find another way to stay in the race. In the next new episode of the show, airing on February 8, Peter’s campaign will make plans to try and reach the youth vote. Method Man will also be making a guest appearance as a former prison buddy of Peter’s, who stops by the campaign office to lend his support.

Meanwhile, Alicia’s got a lot to deal with back at the Lockhart/Gardner offices. Michael J. Fox makes a return appearance as the crafty attorney Louis Canning. The two of them go head to head again for what CBS is calling an Eric Brockovich-style class action lawsuit. Alicia is scrambling to sign up more clients, but the team realizes that there’s a mole somewhere in Lockhart/Gardner who may be leaking information to Canning. The big question, of course, is whether Canning will find another way to outsmart Alicia like he did last time, even if it appeared that she had won. Having Fox back on The Good Wife – and television in general – will be a treat.

Finally, Will and Dianne’s plans to further stage a coup against Derrick Bond will have to be put on a temporary hold as he brings in his Super PAC client. Will they be able to rally and rid themselves of their devious new partner before the end of the season?

Make sure to tune into a new episode of The Good Wife on February 8 and view photos from the episode below.