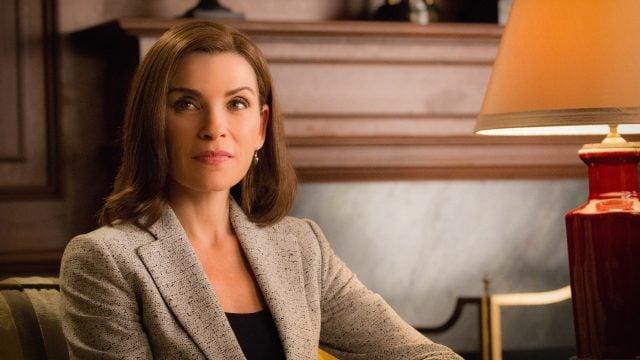 It takes a lot to make me cry. However, when it comes to series finales of my favorite shows I will bawl my eyes out. I did it withÂ Friends, The Office, How I Met Your Mother,Â andÂ Park and Recreation.Â Tonight I did it again when I watched the last episode of the stellar CBS seriesÂ The Good Wife,Â which stars the stunning Julianna Margulies as top-notch attorney Alicia Florrick. After seven seasons, we finally get to find out if Alicia stays with her cheating husband Peter (the always charming Chris Noth). However, you will have to keep reading to find out!

The verdict is in on whether Peter will be going to prison and it came in quickly. It only took the jury an hour to determine if Governor Florrick will be going to prison. Peter and Alicia decidedÂ that he should agree to a two year prison sentence, which is still pretty hefty considering it appeared that Peter was actually innocent this time. In trueÂ The Good WifeÂ fashion, there is a twist. The jury did not reach a verdict, they simply have posed a question: They would like to hear a 911 call from the victim. After listening to the call and noticing a clearly audible noise, the jury wants to know what this is before returning to deliberation. Jason (Jeffrey Dean Morgan) quickly figures out the noise is a ringtone. I wonder if Kalinda (Archie Panjabi) would have been able to do that so fast…

And before we enter into the first commercial break Lucca (the talented Cush Jumbo) has an amazing conversation with Alicia. She tells Ms. Florrick that she needs to thank Jason for his help. Lucca also uses this time to tell Alicia that Jason is worried sheÂ won’t divorce Peter if he goes to jail and that she usually chooses responsibility over love. It only took 156 episodes for someone to alert Alicia of this very obvious fact about herself! And then while fantasizing what her life would be like with either Jason or her husband, Alicia has a third scenario with none other than Will Gardner (Josh Charles), the man everyone wanted Alicia to end up with until he died and Jason came along and swept her off her feet. In this sequence, Will helps Alicia with Peter’s case and aided her in making a decision about love.

Alicia still needs Cary’s (the underused Matt Czuchry) assistance in order to help clear Peter’s name. If she didn’t need his help, Cary may not have even appeared in the final episode. Jason and Alicia question the missing bullets from the evidence locker and ask if he knows who the phone may belong to with the ringtone that went off during the 911 call. The phone belongs to a woman played by Younger‘s Sutton Foster. Fun Facts: Foster worked with Matthew Morrison on an episode ofÂ Younger this season and Morrison’s character Connor Fox is present at the trial where Foster’s character appears. Also, Foster and Matt Czuchry will appear onÂ The Gilmore GirlsÂ revival out later this year.

The twists keep coming with this awesome episode. The missing bullets have been recovered and not a moment too soon. Diane (Christine Baranski) wants the results shown to the jury before a verdict has been made. But then we find out that the bullets came from Locke’s gun, which means Peter has motive to hide them. When it is announced that Diane’s husband Kurt (Gary Cole) will be taking the stand, all heck breaks loose. Diane refuses to question Kurt, and Alicia reminds her that she has a client to represent. When Diane does not cross examine Kurt, Lucca takes over per Alicia’s request. Lucca asks Kurt if he changed his earlier testimony because he had and affair with the woman who bought his business. This is all too much for Dianne and she leaves the courtroom. When I was wondering how I wantedÂ The Good WifeÂ to end, I always pictured something bad happening to Diane. However, this was too much to watch!

The new information regarding the ballistics will not be heard by the jury, so Connor and Alicia try to reach a plea. Connor is offering one year probation as long as PeterÂ ends his reign as Governor of Illinois. Alicia urges Peter to take this offer because she is afraid the jury is too unpredictable. Peter agrees to the deal and asks Alicia to stand by his side one final time. Will comes out of the background and urges Alicia to go to Jason, but not before she tells WillÂ she will always love him. Alicia gives Jason a call and leaves him a voicemail telling him everything is done…

At the press conference for Peter to announce his resignation, Alicia is present but her heart is not in it. She thinks she sees Jason from afar and instead of taking Peter’s hand at the end of the conference, she chases after Jason. Sadly, its not him. Plus, when she turns around she gets slapped in the face by Diane. Alicia did not get the happy ending we all wanted, she is sad and alone. She doesn’t have Peter, Jason, or her job at the new firm she and Diane were going to create. For that reason, I had to shed a tear for Alicia and the series I have loved for the last seven years.

What did you think of the final episode ofÂ The Good Wife? Let us know in the comments section below.