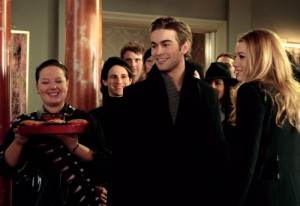 I have never been so enthralled in the Chair phenomenon on Gossip Girl than I was last night… and boy am I pissed!!!!! Meanwhile, Jenny lost some common sense for a moment, Eric returned from the ether, and Dan and Vanessa shocked the hell out of me with their little storyline. But enough babbling, let’s get to it!

Setting Up A Game Of Assassins….

It’s Nate’s birthday and Serena wants to plan an Assassins themed surprise birthday party in honor of her man’s favorite game. But Serena is putting everyone on a gag order and the party is to be as secretive as Real Housewives of NYC’s Bethenny Frankel’s recent nuptials so that Gossip Girl will not know a thing about it. The plan is for Nate to meet Serena for a faux black tie event, which is a ruse for the party. Easy peasy, right? Um, yeah right.

Meanwhile, Chuck visits Jack in the hotel suite for one more plea to get back his hotel. Jack wants to know how far and what will he do to get back the hotel. Chucl admits he will do anything or give anything that needs to be given for his empire. Jack has one thing in mind…

While shopping with Serena, Blair vents her frustration over the Chuck/Jack situation and feels helpless that she can’t do anything to numb Chuck’s pain. Be careful what you wish for, Waldorf. After Serena picks out a dress for Blair and leaves, Blair is approached by Jack Bass, who pulls an Indecent Proposal and asks Blair to sleep with him to save Chuck’s hotel. Blair is disgusted as she should be, but Jack makes the decision an insoluble one: either sleep with him or Chuck is in ruins permanently. 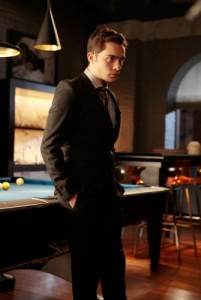 When Blair meets up with Chuck, she asks if Jack made any propositions, which CB claims none that he would stand for. Then Blair walks into her house and sees a box with the dress she was eyeing at the store with a letter from Jack, saying that she has “one more chance to save her man”. Later after Chuck talks with his lawyers, Blair makes the mistake of petting a dog a little too hard and Chuck snaps that there isn’t anything that can be done to save his empire. He apologizes, but the damage is already done as Blair decides to pay Jack Bass a visit. Meanwhile, Serena discovers that Blair didn’t join in the Assassins game and Chuck looks as if he is about to chuck all over his designer outfit.

When she meets up with Jack, Blair presents him with a contract stating that after her ‘services’ are over, the hotel and all of Chuck’s money is returned to CB, no questions asked, and that Chuck must NEVER know about their arrangement. Jack signs the paper with a gusto and after some false starts and a simple kiss, Jack tells Blair ‘Thanks for coming. You have been had.’ Huh?!?

Jack explains to Blair that he just wanted to destroy Chuck on all cylinders and that he managed to take his company then his girl. Blair doesn’t get it, so Jack explains it a little more clearly: Chuck set up the whole thing. CB sent Jack to the shop to find Blair. CB bought the dress she is wearing now to help with the ruse. In short, CB used Blair as a commodity to gain back his hotel. Now, warm your hands up for the inevitable slap that needs to reach CB’s face.

Blair meets back up with Chuck, who tries to throw Blair’s aborted infidelity back on her. While Blair sits there and looks like a sad puppy who has been rebuked by her owner, Chuck reminds Blair of her promise to be by his side through “anything”, and today was the “anything” he needed. Blair whimpers that she can’t believe that Chuck would use her the way he did and Chuck counters that Blair went on her own accord. Blair slaps the hell out of Chuck and tells him to kick rocks.

Chuck immediately runs to claim his prize and throw Jack Bass on his ass, but Jack leaves Chuck with the notion that he screwed up big time with Blair and if he thinks that Blair will forgive him after this then he is highly disillusioned.

As Jack said before departing back for his return trip to Hell, hope the hotel works for you, Chuck, since it’s all that you have left… Dumbass… 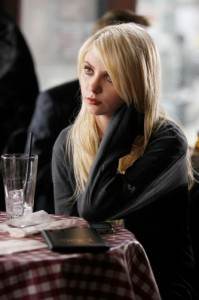 One of the ways Serena prepares for Nate’s birthday is to act as if she forgot it, only to throw him off. But everyone else is in the know of this, including Eric and Jenny. But Jenny, thinking that it’s harsh for Nate to feel neglected on his birthday, decides that this the perfect opportunity to play her hand in winning the young Archibald over. Jenny meets with Nate and uses her recent misfortunes as a clutch that she is in viable need of attention, so Nate blows off a meeting with his grandfather and later with Serena, which throws a wrench in all the party plans Serena created. After an APB goes out for Nate’s head, Jenny decides to go see a movie, where they can’t be found. Eric gets a photo of Nate and Jenny entering a cab from Gossip Girl and he immediately contacts Jenny to bring Nate back to the party.

When Nate and Jenny show up, Serena is a little miffed about Nate not only blowing her off, but that he was spending time with Jenny as well. During the Assassins game, Eric confronts Jenny about her apparent duplicity and Nate sets the record straight with Serena on how Jenny’s been through a bout of the hard knock lifes and that he is just a shoulder for her to cry on. Serena calms her guard, which is a bad thing on so many levels, because Jenny takes her out of the game, leaving only Jenny and Nate as the last two players. As the two run around a restaurant, they eventually end up downstairs in the back office of the place where Jenny wins the game by throwing Nate off with a kiss as she snags his photo (the object of the game is to swipe the other person’s photo before they swipe yours and collect as many photos possible). Nate realizes that something IS going on with Lil J and quickly douses the fire that she thought they had. And Lil J is all alone again. But has she learned her lesson? I think not.

This Week’s Dan and Vanessa Plot Line Is… Dishonesty.

After Dan and Vanessa switch scripts, Dan gets advice from Rufus on to be honest or not to be honest, Dan decides to take 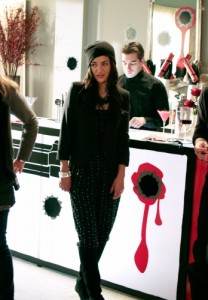 the latter route and lies to Vanessa about how he thought about her script, which was based off of one of his short stories. When it comes time for Vanessa to give her critique of Dan’s play, she claims to have not read it yet. But later, Dan discovers the script with a lot of red ink on it and all writers know that an overdosage of red ink on something you wrote means that it has been ripped to shreds in the critique department. Dan confronts Vanessa about this during the Assassins game and the two have a spat, where Dan claims that her “A+” script was actually a “D”. Ouch. Later, Dan apologizes and Vanessa accepts and tells Dan that he should stick to what he knows when he’s writing instead of branching out, because that’s where he’s good at.

But later we find out that Vanessa herself is also in the running for the Tisch writing program and Dan doesn’t know a damn thing about it. Duplicitous? Scandalous? Wrong?!?!? How about all of the above?

In other news, Vanya proposed to Dorota, who happily accepted!!! I hope we see a big wedding for the two. Meanwhile, Eric might’ve found another beau, who I pray isn’t some psycho out to get him or any of the cast. They are popping up all over The CW this year…

Will Jenny learn to just chill for awhile and not create any more unnecessary drama or will she continue to stumble to adulthood? Will Blair ever forgive Chuck? Will Chair fans forgive the writers for breaking them up? Will Dan and Vanessa (who really look good together by the way) end up having a big lovers quarrel than the small spats that we have been served since the inception of their relationship? Tune in Next Week!!!