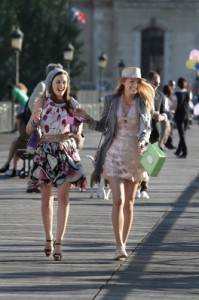 Oui, Oui, Oui!!! Gossip Girl came at us in full force tonight with what could be the most interesting season yet. Yes, I am calling that a bit prematurely, but I sense that the writers are realizing that our little clique of Upper East Siders left Constance Billard more than a year ago, which means that they are really free to explore more adult themes than usual. How adult, you ask? How about parenthood? Yea, that ought to do it. But before we get into that mess, let’s explore what our favorite BFFs/frenemies have been up to in the City of Lights…

Blair and Serena’s Adventures in Wonderland

While Serena is the talk of the town in Paris, Blair is basically just her sidekick the entire time due to her checking Gossip Girl on a regular basis (which, according to Serena, is ill-advised) looking for info on Chuck. But Blair gets a break when she meets Louis, who could be a Grimaldi Prince of Monaco. Blair, thinking this is her chance at true royalty (and getting over Chuck), jumps on this chance when Louis asks her and Serena out on a double date with him and a friend. But Blair’s royalty dreams are bursted when it turns out that Louis is actually the Grimaldi driver, not the prince, who is ironically paired with Serena. Meanwhile, Serena gets a package in the mail from “Brown” who accepted her into their school. Blair’s excited for her best friend, but Serena didn’t actually get into Brown, she was accepted into Columbia. Sacre bleu!!!

Serena tries to tell Blair the news, but doesn’t want to spoil Blair’s night. Enter a call from Eleanor, who breaks the news to Blair, igniting a full fledged hurricane in the Parisian streets. Blair fumes that she will have to share Serena’s spotlight for three more years and I balk in disgust. Try not being a total meanie, Blair, and you might have a spotlight on your own. Serena thinks Blair is being overdramatic (she is), but stays firm that she will be attending Columbia whether Blair likes it or not. Pissed to high end, Blair shoves Serena into a fountain and tries to leave with the Prince of Grimaldi, but Serena comes back (wet and fed up with Blair’s childish behavior) and asks the “Prince” to walk her back to the room cause she’s heading back to NYC. While Blair protests the prince’s leaving in front of Louis, she has the rug pulled from up under her when Louis pulls a move from Coming to America, revealing that he is actually a prince of Grimaldi. He only switched titles to see if Blair liked him for him and not his title. Bam! Blair looks silly as she should be. After realizing how much of a douchebag she is, Blair goes crawling back to Serena, asking for her best friend to stay and help her cope. Serena does, but I would’ve been done if I was her, because there is so much of Blair’s antics I could take.

Vanessa returns from her internship, pissed that Dan hasn’t even called her since their last conversation about the Gossip Girl bomb featuring Dan and Serena in a compromising position. She finds Dan in an even more crazy position as the father 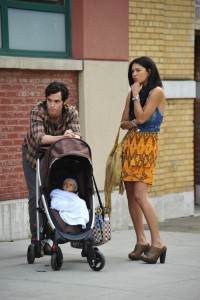 Dan begs Vanessa not to spill the beans to Rufus and Lily, who he’s kept in the dark all summer. How the hell he managed this is beyond me, but anyway. Vanessa then asks the most important question in this craziness. Did Dan take a paternity test? No, he did not. IDIOT!!! As Vanessa (and I) balks at Dan’s explanation to why he hasn’t taken the test (he felt bad for Georgina, whose parents kicked her out), Georgina talks with some Russian (?) dude about something fishy. She tells him that she needs more time all while holding baby Milo’s birth certificate. What is this girl up to?

Georgina finally sideswipes Dan by contacting Rufus and Lily about Milo, which Rufus refuses to believes is Dan’s. Georgina pulls out a paternity test that she had done, but as the past has told these victims of Georgina’s lies, they think it’s a fake. After the doctor who done the test confirms that Dan is in fact the kid’s dad, Dan finally signs the birth certificate after a father/son talk with Rufus. Georgina looks relieved. But is that a good or bad thing?

Later, Georgina sneaks out of Dan’s loft, bags packed and a sad expression on her face as she leaves her child behind! SHUT THE HELL UP!!!!

I hope that kid is actually Dan’s because it would be a change of pace for Georgina’s character and gives Dan more to do than be sarcastic.

As Nate is trying his luck at being Chuck Bass-lite again, he bumps into Juliet Sharp, a smart, sophisticated Columbia student who reads Nate like an open book. The two meet again at the Fashion’s Night Out meet and greet at Lily’s where Juliet serves as a volunteer of Eleanor Waldorf’s. More sparks fly between the two as Juliet senses that someone has hurt Nate, which he denies. When Nate gets a call from Chuck’s penthouse security about his groupies going amok, Juliet follows him there, but leaves her number with him when she sees how much of mess Nate has made trying to forget and null his pain. Nate calls the number later and asks Juliet out for coffee. Now this is where the bombs drop. Bomb #1: Juliet, who we think has been adding price tags to clothes for Fashion’s night out, is in fact stealing the clothes, but retags them when she finishes with them! Bomb #2: Juliet has a corkboard following the exploits of Nate, Serena, Blair, Chuck, Dan, Jenny, and Vanessa. To top all this off? Her computer is set on the Gossip Girl website. WTF?!!? Is Juliet Gossip Girl?!?? I think not. Something else is amiss. 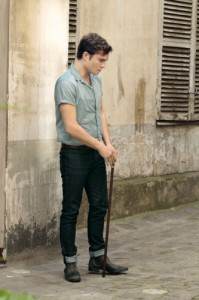 Lily is worried about Chuck’s whereabout since Chuck’s staff has no clue on where to find him. Rufus says good riddance to the Chuck Basstard for what he did to Jenny, but Lily has to find out what has happened to CB, because he still is her stepson and she fears for him.

After finding out that Chuck’s last stay was in Prague, she asks Nate for his help since CB’s credit card charges are irregular for his tastes. I start to wonder about Chuck’s whereabouts as well cause he has not been seen during the entire episode!!! My fear heightens when Lily gets a call in the middle of the night of a body washing up on shore in Prague of a gun shot victim who Prague law officials think is Chuck. NOOOOO!! Wait. Not so fast.

Next, we see flashes of Chuck being nursed back to help by a beautiful girl (ClÃ©mence Posey). Mixed in with those flashes are more flashes of Chuck’s most horrendous moments ever on the show, which wakes Chuck up. When the beautiful girl asks Chuck his name, CB takes off his ring baring his initials and says “Henry Prince.” WHAT?!????!!?

Next, Eva and Chuck both show up in Paris, of all places, to start a new life with each other. Oh, Hell!!!!

Gossip Girl delivered in many ways than one. Chuck’s resurgence was a breath of fresh air as it capped off the best premiere in Gossip Girl history in my personal opinion. Every storyline has potential to grow and be pretty damn watchable, as well as make us care what’s going to happen next. What is Juliet Sharp up to? Is Milo really Dan’s? When will we see the return of Chuck Bass (because it’s going to happen eventually)? I’m intrigued. How about you?