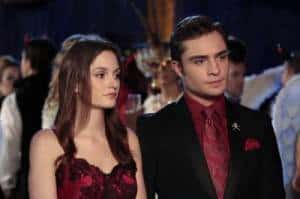 I’m covering this week for Mark who will return with the show in two weeks and I’m glad that I have got such a good episode to review. Gossip Girl really stepped it up a gear in “The Witches of Bushwick” using all of Serena’s pass misdemeanors against her to turn her in to the outcast that Juliet has been trying to all season. There was no mystery brother in prison this week, but Jenny returning once again to be a crucial and devious part of the plot. Whilst the Serena take down took up the majority of the episode the Blair/Chuck story took a sweet and unexpected turn that I will come to later. First up though the three part plan that shows how much Serena has screwed up in the past making it easy for those close to her to expect the worst.

The targets of the plan; Lily, Nate, Dan and Blair have all had experiences with Serena that have been less than savoury, not always her fault but she has a habit of wreaking some havoc and whilst I’m not for having the character destroyed seeing her fumble in this episode unaware of the masterplan made for a really good and interesting episode. The backdrop of the masquerade ball has been done before on this show as Jenny said herself but I think for this scheme it was the perfect random Gossip Girl party of the week. Masquerades definitely seem to be in fashion at The CW with The Vampire Diaries using the same party idea a few weeks back, all the more perfect for executing a good old fashioned vengeance plan.

The Dan and Nate ‘who should I chose’ story has not worked for me this year, not only because I find the idea of Dan and Serena being together being a big about turn at the end of last season that seemed really out of place, but also because it felt like it wasn’t serving the overall story of the show well. This episode it really seemed to fit but only as part of the Serena take down not because it is suddenly working, I would rather see Dan chose Nate and vice versa as this is one relationship on the show that shouldn’t be complicated. I thought it was pretty funny that they showed Juliet remove her mask after she kissed Dan just to make sure that it wasn’t his actual sister doing the deed, just in case you didn’t realise.

For being outcasts Juliet, Jenny and Vanessa obviously know their target well (which includes Juliet’s creepy stalker board of Serena) they know that to get Blair mad then they should tackle her insecurity regarding Serena and that scandal will drive a wedge between Serena and her mother. Whilst Rufus may not be the brightest when it comes to the habits of their children (trusting Jenny so much proves this) it was nice to see him sticking up for Serena, some one had to right? Whilst we’re on the subject of his kids it was rather pleasant to see Jenny without the raccoon make-up on at the masquerade though I’m sure it will be back next time we see her. Also did any one notice that Taylor Momsen’s band The Pretty Reckless had a song on this weeks soundtrack? ‘Make Me Want To Die’ was playing during the party as Chuck and Blair had their relationship talk and fitted in rather well.

On to Blair and Chuck who have spent last week pretending they were not getting back together and started this episode in the same way. The Blair/Chuck relationship is clearly a favourite of viewers so when it looked like this was the proper reconciliation that fans had been clamouring for (which included a very sweet declaration of love), it was only going to have an obstacle put in the way. The obstacle being that Chuck as the man can have all that he wants whereas Blair has to sacrifice some of her drive and ambition for the relationship. This actually seemed pretty realistic considering the world that they live in and is one that has definitely spiked my interest in the journey of them being apart and how they will come back together.

The episode ended with Serena in rather a bad position, drugged and with Juliet who really seems to be on the far end of crazy at this point, ignoring calls from Vanessa, quitting Columbia from Serena’s phone via text, (which doesn’t seem to fit in to the realm of plausibility, much like texting from jail) and taking her back to her apartment. What does she plan on doing with her now?

What did you all think? Sad to see Chuck and Blair still apart? Feel bad for Serena’s predicament? Want to read Dorota’s time travel novel? Let us know in the comments below or join us in the forums.