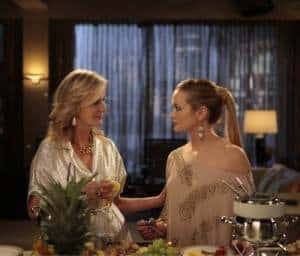 This week’s Gossip Girl featured Blair’s bridal shower and some quality Chuck and Dan bonding. When Serena failed to invite Dan and Chuck to Blair’s shower, Dan decided to commiserate with the only other person. But Chuck rightly pointed that Dan has spent his life defining himself as an outsider. If he wants to be included, then he needs to redefine himself.

Charlie’s friend Max came to Lily’s penthouse to meet her and Charlie managed to come up with a convincing lie about her dual identity to both Lily and Max. She said that she and her mother had created the identity of “Ivy” so that she wasn’t branded a Rhodes. Max seemed to buy it until he saw a photo of Charlie’s “mother”, Carol. Then he confronted her about being an imposter and she bought him off.

Nate’s grandfather dropped by to tell Diana that he’s invested in the Spectator to help reinvent Nate. But he said she wasn’t working fast enough and said had the next three days to hit it big or he would fire her. Nate managed to get a copy of Gossip Girl’s sources. Serena didn’t want him to release it, since they all sent her information about each other. But Louis ended up uploading the list to the Spectator’s website, exposing everyone. Diana took the fall for the release to protect Nate and ended up being fired. But when Blair found out that Louis exposed the list of sources, she told him she needs to reevaluate their relationship.

In the November 28 episode of Gossip Girl, a Studio 54 party is being thrown in CeCe’s honor and the Rhodes women (Lily, Charlie and Serena) are eagerly anticipating the event. Nate begins his new position at the Spectator. But when his first story is about someone he knows, he’s torn about how to proceed.

Updated: Go vote in our poll about which man Blair should choose to be with.

Watch a trailer below for the November 28 episode of Gossip Girl. 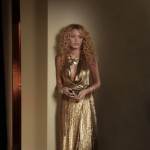 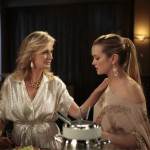 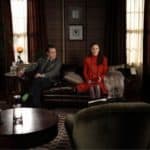 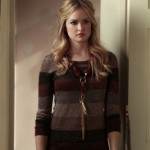 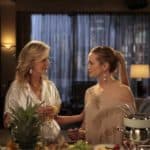 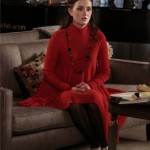