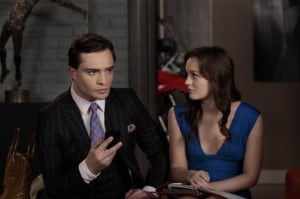 The final season of Gossip Girl is nearly upon us and it looks like it’s going to be a scandalous one.Â  You’ll recall that Serena disappeared at the end of season 5.Â  When the show picks up again, she’ll still be MIA.Â  That is, until her frienemies band together, track her down, and find her living a double life.Â  She’s hooked up with a wealthy man and isn’t keen on bringing her former identity of Serena van der Woodsen into play.

Meanwhile, Blair and Chuck have found their way back to one another…and, apparently, some great sex.Â  Georgina is sticking around for this shortened season, determined, we’re sure, to stir up more trouble.Â  Here’s what The CW has to say about the new season:

Season six opens with the Upper East Siders working together to find one of their own. Serena (Blake Lively) has gone off the grid, beyond even the reach of Gossip Girl. Her friends fear for the worst and hope for the best, but even they can’t imagine where they will ultimately find her.

Meanwhile, Blair (Leighton Meester) has offered Chuck (Ed Westwick) her heart, but is her love enough to help him win back his empire? Lonely Boy Dan (Penn Badgley) has written a new book that promises to make even more trouble than the first, and this time he has no desire to remain anonymous. Nate (Chace Crawford) is determined to finally reveal the true identity of Gossip Girl, thereby making a name for The Spectator and himself. Lily (Kelly Rutherford) and Rufus (Matthew Settle) turn on one another when Rufus makes a surprising new ally who threatens Lily and her family. Always ready with a scheme, Ivy (Kaylee DeFer) is prepared to stir up trouble.

Anywhere else it would be too much drama to handle, but this is the Upper East Side. And when Bart Bass (guest star Robert John Burke), Jack Bass (guest star Desmond Harrington) and Georgina Sparks (guest star Michelle Trachtenberg) show up to raise hell, it’s a fight to the spectacular series finale. Who comes out on top? That’s one secret I’ll never tell… xoxo, Gossip Girl.

Watch a new preview below and tune in to the season premiere of Gossip Girl on Monday, October 8 at 9:00 p.m. ET/PT on The CW.