Home
Gossip Girl
Gossip Girl Trailer: Chuck Fights for Blair in 4.20 “The Princesses and the Frog” 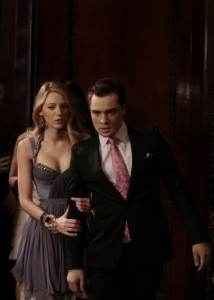 On May 2, Prince Louis’ family arrives from Paris to investigate his relationship with Blair, who they don’t approve of. But Chuck and Serena aren’t prepared to let Blair settle into a fairytale life with the Prince, although for very different reasons. Serena has declared war on Blair after the events of the last episode and decides to expose a few skeletons in Blair’s closet in an attempt to derail her plans of becoming Louis’ princess.

Chuck, on the other hand, is torn up about Blair’s relationship with Louis and starts to self-destruct. His friends don’t seem eager to help the couple reunite. Even Nate thinks that Blair is better off with Louis. But he seems determined to win her back. The question is, will he succeed?

Watch a trailer for the May 2 new episode of Gossip Girl below, then go take a look at promo photos for the episode.