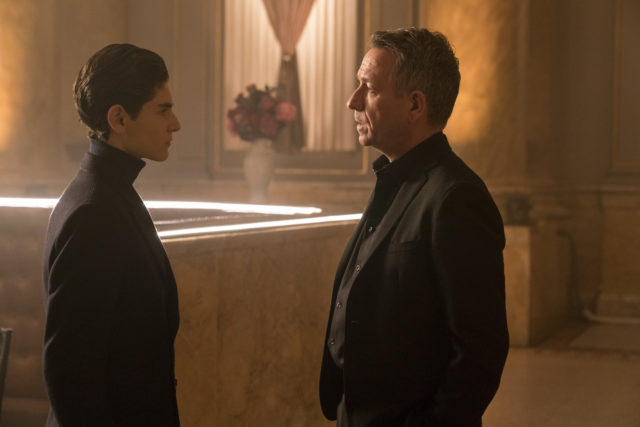 I loveÂ Gotham.Â I really do. At it’s best, it’s a fun action show in a universe I love. At its worst, it’s still a universe I love and characters that I love, but spins its wheels a lot. “A Dark Knight: Reunion” finally broke free of the mud in whichÂ GothamÂ has been (largely) spinning its wheels for the last few episodes by giving its main characters the conversations they should’ve had weeks ago, but didn’t, only to keep the drama flowing for a few episodes.

I think that fans of the show were looking forward to one reunion over the others, so I’ll save that one for last. Instead I’ll start with the “dark knight” part, Alfred and Bruce. At first, Alfred’s flat-out refusal to come help a dejected Bruce annoyed me, because it felt a lot like the aforementioned wheel-spinning. But by episode’s end, Alfred’s tough love had put Bruce back on the bat track and repaired their relationship. I’m not sure why it took Bruce becoming Batman again to win Alfred back, or what kind of keynote address that was at Bruce’s fundraiser, but ultimately what worked for the show was the reparations made to the relationship. You can’t have Batman without Bruce AND Alfred.

The next reunion, Jim and Harvey, was definitely my favorite. I have long lovedÂ Gotham,Â but in large part because of the Gordon/Bullock relationship. It’s the key relationship of the show.Â GothamÂ was originally presented as a cop show that did their best to stop the city’s underbelly from developing into the villain incubator it has become. Though they largely failed at that, Bullock and Gordon at odds just didn’t work for the show. Now that the bridges have been mended (ish), I’m much more optimistic about the show’s future. Donal Logue and Ben McKenzie are just too good together.

Finally, the reunion I know you all want to talk about, which is the one that the kids are calling “Nygmobblepot”. Though Oswald was once spurned by Ed, this time the Riddler wandered directly into the Penguin’s warm embrace, sidelining Ed. Ed’s internal struggle has been compelling to watch and the potential for The Riddler to be united with The Penguin and The Joker is just too good an opportunity to pass up.Â GothamÂ is at its best when it goes full blast into the insanity, and there’s no better way to do it than this.

I’m just really glad thatÂ GothamÂ has finally stopped wheel spinning and dealt with the relationship drama that’s been plaguing it over the course of several episodes. This episode was an improvement, and I hope to see it on an upward trajectory.

Several broken relationships make progress toward healing as things in Gotham get worse on this week’s strong episode of Gotham.