Home
Gotham
Gotham Review: All Aboard “The Sinking Ship” 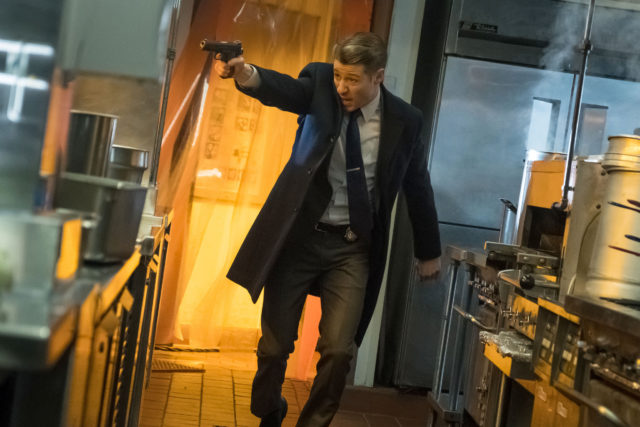 Last week, I mentioned thatÂ GothamÂ had spun its wheels a little bit, but at the end of last week’s episode had put some of its relationships back on track. Bruce/Alfred, Gordon/Bullock, and Nygma/Cobblepot were all well on their way to renewed relationships when last week’s episode ended. This week,Â GothamÂ continued the trend of repairing certain relationships, reignited old rivalries, and all-around took their characters into a strong Season One feel. I loved the first season of this show, and this was a full on nostalgia trip for me. Gordon and Bullock worked a case. Bruce and Selina worked together on something. Penguin even visited the docks in a nod to the pilot episode. What this episode proved is simply thatÂ GothamÂ is at its best when the characters are living in honest relationship to each other and not manufacturing drama to draw things out for 22 episodes.

It was so good to see Gordon and Bullock work a case together again. One of the reasons that I loved this show in the beginning was that it made a wonderful buddy cop show, with Gordon as the younger cop full of ideals and morality, and Bullock the cop that dealt in moral gray areas. This time, the roles were somewhat reversed. Jim was coming down from the admission to Harvey that he was named Captain because Sofia Falcone made it so, and Harvey took that information, kept it to himself, and told Gordon that he was the hero that Gotham City “needs.” This, of course, was very clear foreshadowing that once golden boy James Gordon will fall from grace and Gotham City will need yet another hero. Though I agree with Bullock, the much worse punishment is to stay silent and not experience the relief of confessing your sins.

My favorite part was seeing Gordon and Bullock back at it together, but it was just so refreshing to have all of the mainÂ GothamÂ characters behaving honestly toward one another. Penguin reconciled his ultimate trust and care for Nygma (well, really the Riddler I guess). Butch realized himself and did what Butch would have done. Bruce and Selina’s relationship was repaired, and it was quite fun to watch them kick butt together. Perhaps the strongest of these moments was Lee Thompkins, coming in to save Jim’s butt at the last second, and then keeping him alive until he could receive better medical attention. As often as Jim and Lee have fought with each other, Lee shot her former sister-in-law and saved Jim, showing where her true allegiances lie.Â GothamÂ has done a lot of wheel spinning this season, but it was SO good to see the characters I love behaving honestly and realistically toward each other. This is so much better than dragging out a plot.

I am so, SO pleased thatÂ GothamÂ turned things this direction. I’m the most patient TV viewer I know, but I was starting to get a little frustrated. TV shows are always better when the characters behave honestly toward themselves and one another, and I absolutely believe they did that here. What a way to suck me back in, Gotham! The creatives certainly deserve your applause for this one.

Gordon, Bullock, and the rest of Gotham City work to take down Sofia Falcone on this week’s compelling episode of Gotham